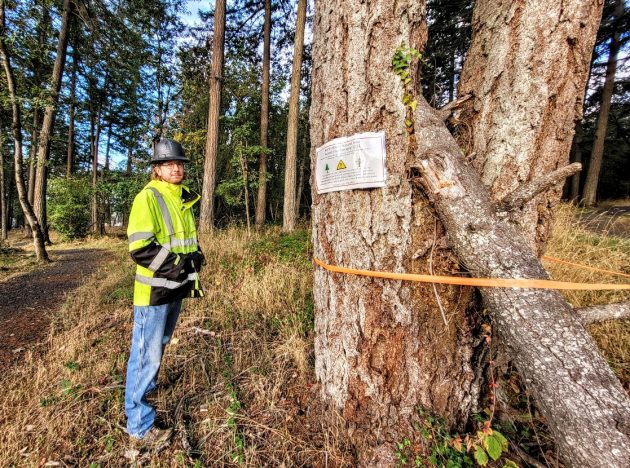 Benton County’s Adam Stebbins stands by one of the ailing Doug firs to be taken down.

The Benton County parks department is about to start cutting down more trees in what it calls the North Albany Natural Area, and it wants people to know why this has to be done.

A logging contractor and an arborist will get to work in the 10-acre woodland near the corner of Valley View Drive and Crocker Lane in North Albany on Oct. 18. They’ll take down about 50 Douglas firs and are expected to be done by the end of October.

To explain, Adam Stebbins met with me among the towering trees in that stand on Thursday morning. He’s the natural resources coordinator for Benton County Natural Areas, Parks & Events. (I call it the county parks department for short.)

The reason, in a nutshell, is to take down dead and drying Douglas firs before they fall down and kill or hurt someone on the area’s loop path or rip down the power lines on the west side of Crocker Lane.

Douglas firs have had a tough time surviving in the Willamette Valley in recent years. In many places, drought and beetles have weakened many to the point where they are certain to die much sooner than if those conditions were not present. And that’s the case with the trees marked to be cut this time. All are ailing and considered a risk of causing damage when they fall.

This is the fourth time in about five years that the county has taken out Doug firs in North Albany, twice in the natural area at Valley View and Crocker and twice in the nearby North Albany County Park.  Valley pines have been planted to replace the trees taken out in the park. The pines are better adapted to present-day conditions, and a few of that species are already in the ground in the natural area.

Benton County acquired the area for one dollar and a street assessment in a 2015 deal between the county, the city of Albany, and the developer of a subdivision to the south. Housing had been planned for the area originally, but as part of the deal the woodland was preserved.

The county has contracted with R.L. & Sons of Philomath to do the logging, and with a Philomath arborist, Dunn & Co. Tree Service, to take down three of the tallest trees near the power lines on Crocker Lane. The logs will be taken to Philomath mills to be ground up for mulch or hog fuel.

For safety reasons, the walk will be closed to public use during the operation, as will the entire natural area.

This is a mixed woodland. Besides Douglas fir, there are Oregon white oaks, some of them looking ancient; big-leaf maple, some very tall cottonwoods, and various hardwoods. It’s a haven for deer. squirrels, birds and other wildlife, an island of undeveloped land surrounded by housing tracts. County parks scheduled the tree removal after the nesting season and keeping clear of the time when fawns are born.

Signs about the logging have been posted for a while. But Stebbins said he hasn’t received any reaction to the logging plan. (hh) 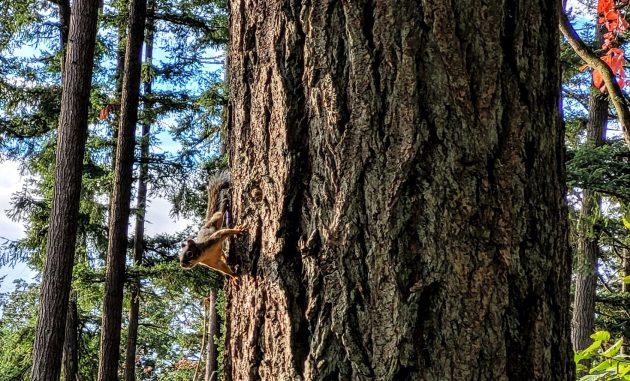 A chickeree or Douglas squirrel checks out the visitors. This tree is not one to be cut. 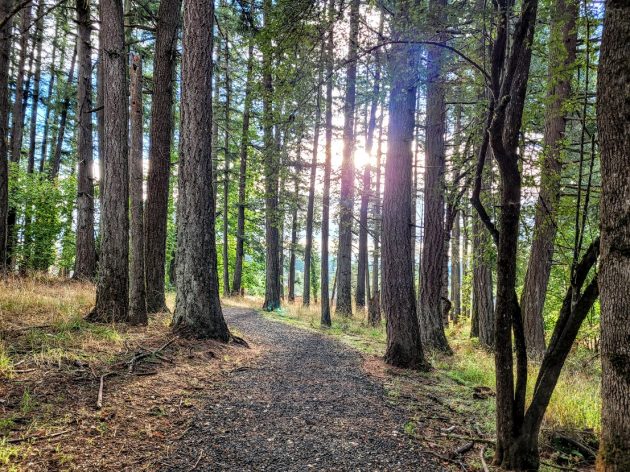 Looking east out of the woodland along the established gravel path. None of these trees are marked for felling.


5 responses to “In North Albany woodland, reducing the risk”