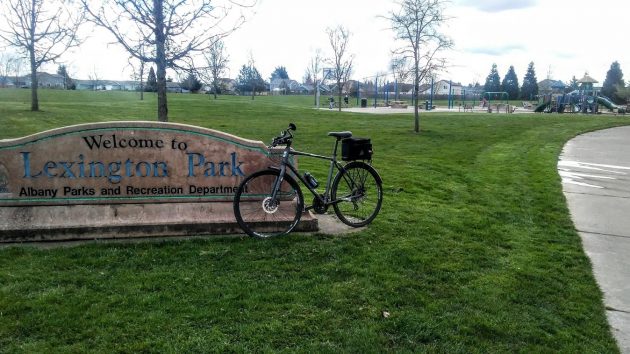 The park marks one of the entrances to Albany’s Lexington neighborhood.

On Saturday afternoon, I rode the bike around the Lexington neighborhood in southeast Albany — to check out the streets and the condition of the pavement.

The area was developed 20-25 years ago, and the streets still seem in pretty good shape. Now the city wants to do something to keep them in good condition for as long as possible.

That’s why on Wednesday, the city council will be asked to award a contract to apply a “latex modified slurry seal” on segments of almost all the streets in the subdivision east of Waverly Drive, from 21st Avenue down to Grand Prairie Road.

The man exception is Lexington Street itself. All the streets west and east of Lexington are to get the treatment, according to a map provided by the city staff.

“Application of slurry seal,” a memo to the council says, “is a cost effective way to provide a new wearing surface and extend the life of the asphalt.”

A Nevada company, Intermountain Slurry Seal Inc., submitted the lowest of five bids to apply the treatment to about 52,500 square yards of pavement. The bid, $105,622, was far lower than the city’s estimate for the job. So the staff is asking the council to expand the scope of the project by another 37,600 square yards, which would add about $71,000 to the bid price.

As you can see in the video below, the streets are in far better shape than in some older parts of town, and keeping them that way is certainly worthwhile.

And as usual, sorry about the wind noise. Turn the volume down, or off.

And by the way, as you can also see, Lexington has been developed fairly densely. It even features some duplexes in what otherwise is a subdivision of single-family homes. (hh)

Duplexes in this cul de sac provide “middle housing” in the Lexington neighborhood.