In fatal bike crash, waiting for the cause 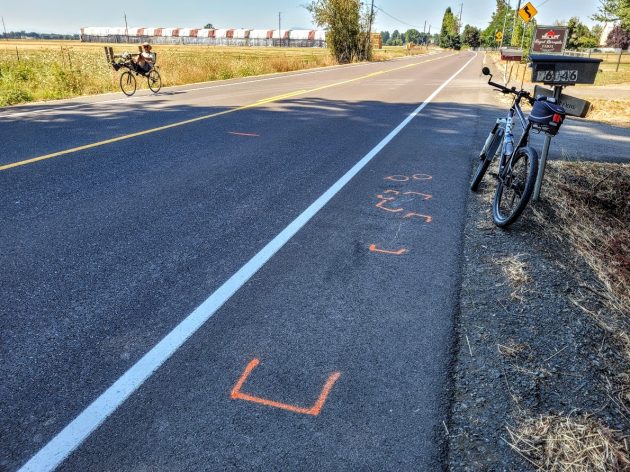 Riding a recumbent, a cyclist Tuesday passes the area on Riverside Drive where a fatal bike crash happened the week before. (My bike is leaning on the right.)

One week after an Albany bicyclist died in a collision with a motor vehicle on a widened section of Riverside Drive, Linn County sheriff’s detectives are still trying to determine exactly how it happened.

The crash killed Kelli Kennedy, 52. Her family published her obituary in the Aug. 30 edition of the Albany Democrat-Herald. A wife and mother of three, she worked at Assurant, an insurance company with offices around the world including one in Albany.

My deepest condolences to the Kennedy family for their loss. Riding a bike was one of Kelli’s favorite things, her obit said.

The crash happened shortly after 8 a.m. on Tuesday, Aug. 23, on Riverside about 500 feet east of the junction with Bryant Drive.

The cyclist was riding west on Riverside, toward Bryant Drive, when she was struck by a 2002 Chevrolet Avalanche. The sheriff’s office has withheld the name of the driver but said in a press release the person was cooperating and “impairment does not appear to be a factor in the crash.”

I asked Sheriff Michelle Duncan for details, including the name of the driver and whether the cyclist was riding on the shoulder.

“Determination of the exact location of the bicyclist is still what we are investigating,” the sheriff replied by email this morning. “I do not have a completed investigation and detectives are still working on it.”

As for the operator of the Chevrolet, the sheriff wrote: “The driver is not being identified yet. There are some things we are being sensitive to in this case until we have the investigation completed.”

That section of the road is part of the 2.4 miles of Riverside, from Oakville Road to Meadow Road, that Linn County had widened and repaved in the spring of 2018. The project included wider shoulders.

Sheriff Duncan confirmed to me that both the cyclist and the driver were going in the same direction on Riverside that morning. The west-bound paved shoulder there is just shy of 5 feet wide.

This road is a popular Albany bike route — out Riverside and then back to town on Bryant Drive and Bryant Way.

Since Riverside was widened, cyclists have had less reason to worry about cars passing them too close — until now. Which is one reason why it’s important to establish exactly how this happened.

“Although we have some ideas of cause,” the sheriff told me, “we are still doing investigative work on this to confirm.” (hh)


10 responses to “In fatal bike crash, waiting for the cause”