In Bryant Park, a hazard tree comes down 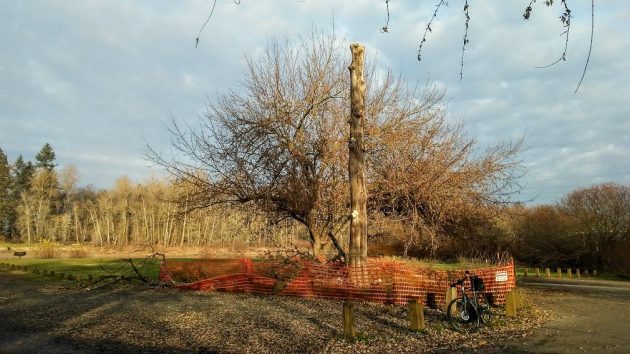 This used to be a “hazard tree” in Albany’s Bryant Park, dying or already dead and scheduled for cutting down lest its upper parts snap and fall on unsuspecting visitors below.

On Tuesday afternoon, the branches had been sawed off. What was left of this Oregon ash looked more like the makings of a totem pole.

No such “cultural appropriation” is planned, I’m pretty sure. My guess is the remaining trunk will fall to the chainsaw forthwith.

The park is on one of my bike routes, and last April I had noticed the plastic orange netting around the tree, warning people to stay away.

Rick Barnett, now the acting parks director while the director is on maternity leave, told me then the tree was about 50 years old. Because it was a nesting tree, the parks staff had left it alone even though it was struggling for the last few years. But then a big chunk of the bark came off, revealing decay underneath.

Wanting to wait until after the nesting season was over, the parks crew had planned to take the tree down after Aug. 1. Other maintenance work had priority, but now the tree is going.

On this Wednesday morning, Barnett explained that the tree “was very dead so they had to work cautiously, which is why they didn’t finish yesterday. They are going to take it the rest of the way down today.”

None of this is particularly remarkable as news, obviously — just another reminder that the work of keeping up Albany’s many parks is never done. (hh) 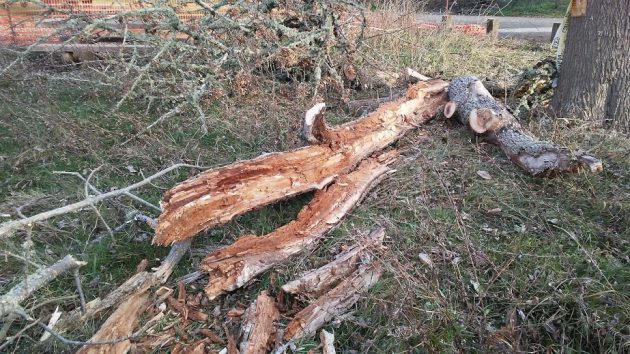 This big branch evidently cracked open when it fell, revealing how decayed the tree was.


7 responses to “In Bryant Park, a hazard tree comes down”