In Albany project, a Swedish connection 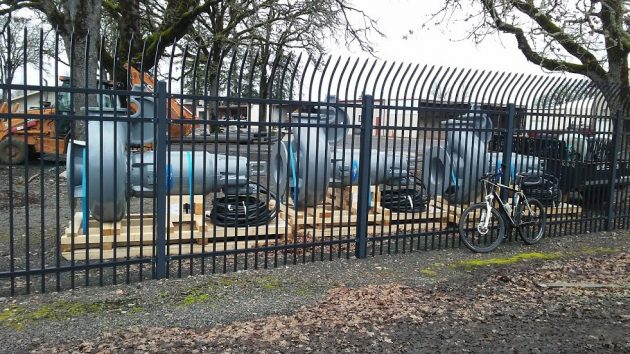 On a bike ride past the east end of Front Avenue on Sunday afternoon, these three machines caught my eye. Back home later on, I took a virtual detour to southern Sweden to catch a glimpse of where the things were made, and how.

The machines, it turns out, are three 135-horsepower pumps destined to be installed in the well of the wet-weather lift station being constructed on the Albany riverfront, off Water Avenue near Montgomery Street. This I learned from Friday’s weekly report to the council by City Manager Peter Troedsson.

The wet-well structure is more than 30 feet deep, and Troedsson reports that the last concrete pour was completed last week. Next, a crane will lift out the iron plates that shored up the hole. Nearby, an electrical building to serve the underground pump station has gone up. And Troedsson says all but the last 100 feet of the 1¼-mile sewer pipe to the treatment plant has been installed.

The project — pump station plus new sewer pipe — is intended to take the load off the main Riverfront Interceptor during periods of heavy rain in order to prevent overflows to the Willamette River.

This phase of the work, including construction by Pacific Excavation under a $7.2 million city contract, should be finished by April. Then, trenchless construction methods will be used this summer to make repairs on the Riverfront Interceptor itself.

The labels on those big pumps, stored behind the fence of the city operations yard, say they are of the Flygt brand (part of a conglomerate named Xylem) and were made in Sweden. So I looked it up.

Turns out that a blacksmith named Alfred Stenberg started a foundry in Emmaboda, a town in southern Sweden, in 1901. Years later, he got together with an engineer from Stockholm, Hilding Flygt, and Flygt pumps started being manufactured in Emmaboda.

The company’s website has a five-minute YouTube video of the factory at work. It’s worth a look. In a promotional video like that, you expect everything to be absolutely spotless and otherwise perfect, and so it is in this case. Even so, it’s an education to watch an ultra-modern manufacturing plant turning out complicated industrial products. If you want to see it, click here.

According to the video, the Flygt plant established a school to train employees in its processes. This sounds a bit like the school-to-work pipeline that Albany-area industries have set up with the support of Linn County, the city of Albany and Linn-Benton Community College, a program that I’m told has so far trained people to fill about 1,100 jobs.

Sewage pumps may not be the most entertaining subject in the history of blogs. But that’s what you get from me reading a label and going on an Internet tour. (hh) 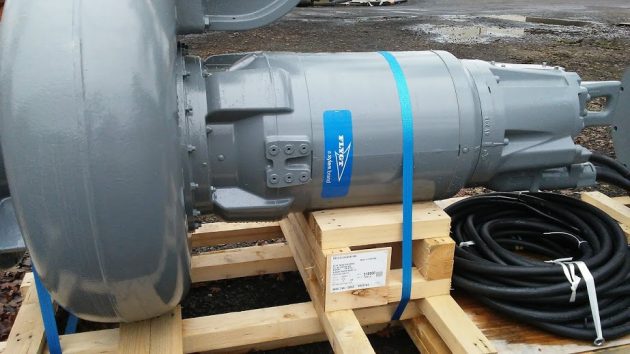 One of the three Flygt pumps awaiting installation in Albany.


3 responses to “In Albany project, a Swedish connection”