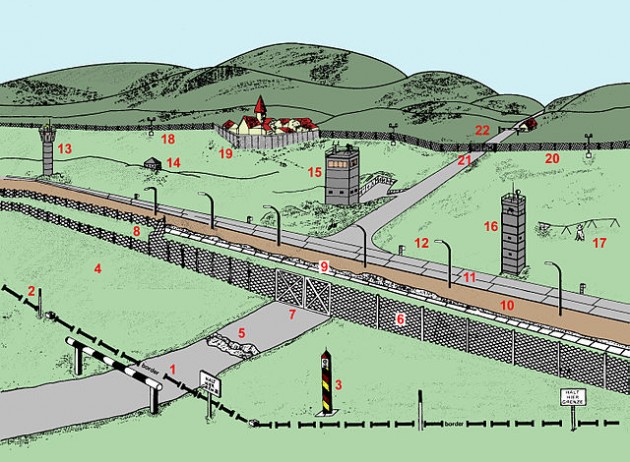 What a “secure border” looked like between East and West Germany.

In the immigration debate, it might help if we all started being clear about what we are talking about, and about what can and can’t be done.

When the Associated Press reported a few days ago that 50 children from the crisis zone on the southern border had been transported to Oregon, Gov. John Kitzhaber said the state welcomed the children and the border surge was a reminder of Congress’ failure to enact immigration reform. Reform? We have a whole set of immigration laws, and they are widely ignored. Exactly how would a revised set of laws be better observed? And how would law changes affect the forces that cause people from Central America, including tens of thousands of children, to endure all kinds of hardships to make it to the U.S.?

“Immigration reform” is a meaningless term without details of exactly how the laws would be changed. And no matter how they are changed, they are not going to improve conditions in parts of Latin America, or do away with the other factors that cause people to come north.

Another favorite catch phrase is “secure the border.” I saw a secure border a few times when I was a boy: It was the German sector of the Iron Curtain, a wide system of no man’s land with watch towers, barbed wire, death strips of plowed and cultivated earth to show footprints, and maybe tripwires and mines. Now and then there were press reports of some desperate person being shot dead trying to cross in order to escape to the West.

So, to claim that a “secure border” would prevent unauthorized arrivals from the south is nonsense unless we mean to set up sniper posts and shoot people on sight as they climb up our side of the Rio Grande.

Instead of harping about “immigration reform” and “securing” the border, we ought to ask ourselves what makes poor people want to come to the United States. If they are unhappy in Honduras or Guatemala or Nicaragua, instead of heading north, why don’t they make the shorter trip to Panama, Columbia or Venezuela? I don’t know the answer, but I suspect it has something to do with our social safety net, our education benefits available to all children, and respect for individual rights generally.

We’re not going to abolish those, and we’re not going to let little kids fend for themselves on the streets or in the desert if we can help it. Uncontrolled immigration is a problem, I grant that, and I don’t have the answer. But I suspect that throwing around phrases like “securing the border” and “immigration reform” are not it. (hh)