Imagine: A riverboat used to tie up here 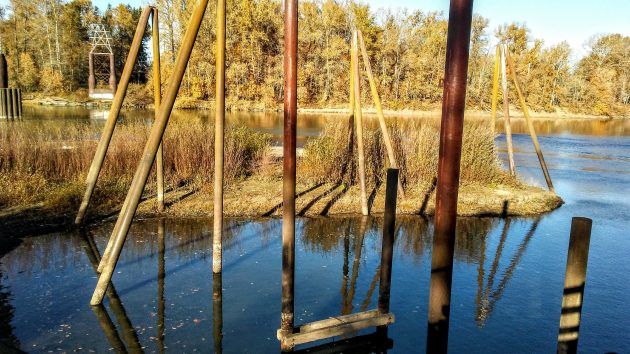 The pilings of the former Monteith Riverpark dock in the afternoon sunshine on Oct. 29.

Looking at the steel pilings in the Willamette River off Albany’s Monteith Riverpark, you wonder if they’ll be put to use ever again.

The pilings are what’s left of the Monteith Riverpark dock, built as part of the park itself in 1983. In March that year, the Democrat-Herald pictured the wooden planks being laid. The cost of the dock and a viewing platform downstream was listed as $164,000.

The park itself was built on a former industrial area at a cost of $450,000 in state and federal grant funds. The driving force behind its creation was Dave Clark, Albany’s parks and recreation director. “We finally stopped turning our back on the river,” Clark said when Monteith Riverpark was dedicated on Sept. 24, 1983.

The highlight of the dock’s history came on March 30, 1998, when a crowd of 200 welcomed the Willamette Queen, the first sternwheeler to tie up at Albany in more than a 100 years. The boat was based in Albany for several years, offering tours up and down the river. Its owner eventually moved it to Salem because the shifting gravel bars made operating on this part of the river tricky.

There was trouble with the dock itself as well, what with vandalism and changes in the Willamette’s current. Men fishing on the dock had to rescue two people when the current pushed their canoe underneath the dock in June 1992. An arsonist set fire to the dock in 1999, causing the Willamette Queen to operate from Bowman Park for a while.

Then, after the sternwheeler left for good, the parks department  considered the dock as just too risky to boaters and took it out in late 2001. Only the steps now remain, leading down to a dock that isn’t there.

Any prospect for a change? Probably not, but …

Consultants hired to design and make plans for a redevelopment of the entire downtown riverfront have hinted that because the piles are already in place, doing something there might be easier in terms of getting permits. Just what that might be is hard to foresee.

Look at what the river has done in the years since a little ship sat out there. At low water now, a dock would lead only to a big fat pile of gravel and dirt. (hh) 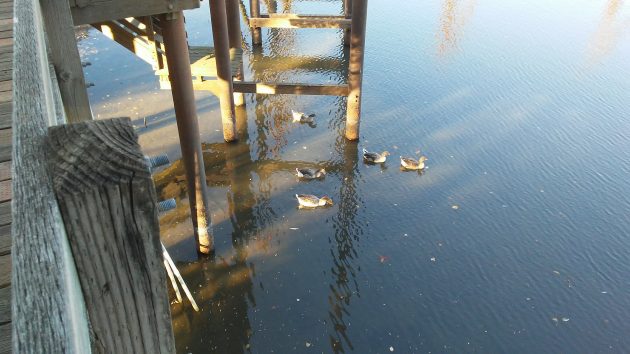 Some geese paddle about underneath the pier that leads to the former dock at Monteith Riverpark.


One response to “Imagine: A riverboat used to tie up here”