IGA opening date is in sight 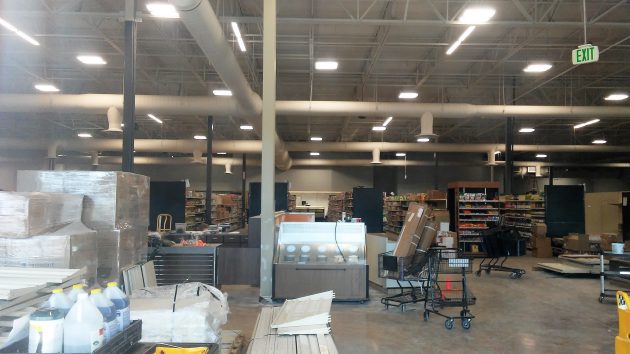 Looking through the doors of the not-quite-ready North Albany IGA on Saturday, March 31.

The company preparing to open the North Albany IGA supermarket — long awaited by many North Albany residents — has been quiet about the opening date, but the word downtown is that it will be April 18.

Downtown? Yes, at the downtown liquor store, which has been licensed to The Myers Group of Clinton, Wash., since last year. That’s the company that’s been working since early 2017 to get the new supermarket ready to open at the North Albany Village shopping center.

As I reported when the OLCC transferred the store’s license to the new operator in August, the downtown liquor outlet will move to a spot inside the supermarket.

Albany City Manager Peter Troedsson reported the market’s apparent opening date to the city council in his regular Friday summary of noteworthy items. How did he know?

He told me he was talking to the staff at the liquor store about their coming move across the river. “I asked about a time frame,” Troedsson said, “and they indicated they’d close on April 15, move, and be ready for the opening on April 18.”

Hoping to confirm the date, I texted Tyler Myers, president of the Washington-based chain of groceries and other stores. But he didn’t respond in time for this story.

People peering through the glass doors in the front of the store — as I did Saturday afternoon — can see that some of the shelves in the back appear to have been stocked with items with a long shelf life. But there also appears to be a lot of work yet to be done in order for the doors to open at last. (hh)


4 responses to “IGA opening date is in sight”