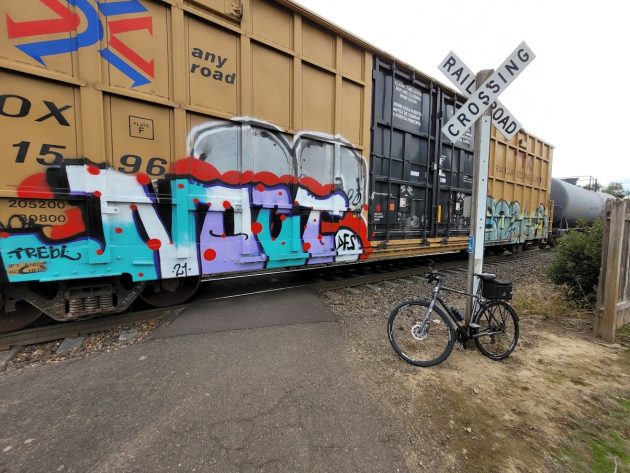 There’s a little paved path across the old Oregon Electric Railway tracks at Burkhart Street in Albany. It’s on one of my bike routes through town, and I spent a few minutes there on October 8, trying to decipher the lettering that graffiti artists had left on the cars.

I couldn’t read most of that stuff, but I gather it’s not the point of these works to be understood, at least by the likes of me. I do admire some of the coloring, though. Whoever creates these renderings must have a pretty good budget for paint.

If you like trains and have about six minutes to waste, take a look at the video below.

The crossing serves people in the quiet neighborhood to the north of the tracks. They can use it if they walk to and from Waverly School or the commercial areas along Pacific Boulevard to the south.

It’s on a segment of the rail line that’s an extension of the Portland & Western’s Millersburg yard. So now and then, the crossing is blocked as the railroad builds trains in the yard, going back and forth across the streets to the west when the trains being built are as long as this one was.

If you watched the video, you may have noticed that the old switch engine still bears the name of the Willamette & Pacific, the shortline created in 1993 from local and regional lines of the Southern Pacific. The W&P later was combined with the P&W, another shortline formed by the parent company of both.

“ASER CRAE SEMFE” were three of the words sprayed on one of the cars that could be read. No idea if they mean anything. Google Translate didn’t come up with anything that made sense under the circumstances.  So I’m pretty sure — or hope — they aren’t dirty words. (hh)


5 responses to “If you like trains, here’s something for you”