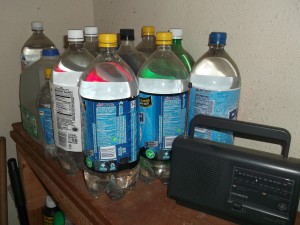 Among the essentials: Water and a radio

The aftermath of Sandy, the big storm on the East Coast, reminds us all that we ought to be better prepared, even here in the tranquil mid-valley, where severe weather is very rare indeed.Our last really big wind storm was 50 years ago, and though it was bad, it was nothing like what hit the East Coast last week. We’ve had the occasional high water since then, and in the Cascades there’s been a big fire now and then, but for the most part, we have been spared disasters. That doesn’t mean we are immune. As we all know, our biggest threat is a big earthquake. The scientists keep telling us that we are due for one. And if it happens, it could be worse than any storm. A big quake would knock out power and destroy highways and bridges. It could also snap natural gas lines, and as the people back east have just found out, this could cause devastating fires.

So what does it mean to be prepared? Mainly, it means having a supply of food and water for everybody in your household for at least a couple of weeks. Also, figure out how to provide heat and light without either power or gas. A portable generator might come in handy. Radios and flashlights with lots and lots of batteries. Plenty of fuel for your fireplace if you have one. If not, some kind of burn barrel for outside, also with piles of fuel.

The main thing is to think ahead. Think of how you survive each day, and how you would manage without utilities at your house or gas for your truck. We may not want to look like a bunch of survivalists. But better to be prepared, better than to starve or freeze when the big one hits. (hh)