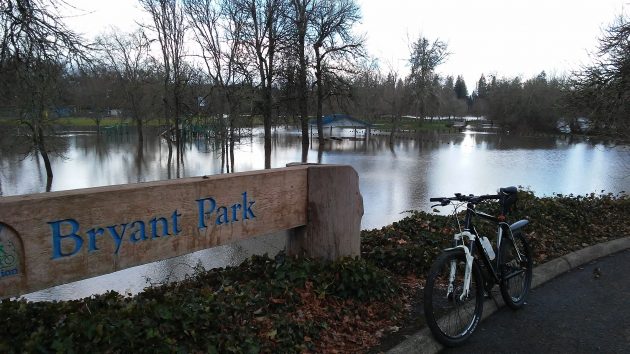 There’s no news here, just an observation: Wouldn’t it be nice if the seasonal wintertime flooding of Albany’s Bryant Park was a permanent thing and people could enjoy something called Bryant Lake all year long?

The Albany area has a few duck ponds in its city parks but no actual lakes. To get to a lake — or a reservoir, as the case may be — you have to drive about an hour east into the foothills of the Cascades or south to Fern Ridge near Eugene. As far as catastrophes go, not having a proper lake close by may not count among the big ones. But still…

Except for a few swampy oxbows that mark the formerly braided channel of the Willamette River, geologic forces did not favor us with the formation of lakes. Elsewhere on the continent, ice age glaciers formed moraines and left big lakes behind, but nature worked no such wonders here. So, in an idle moment, we are left to gaze at high water at Bryant and think about what might have been. (hh)