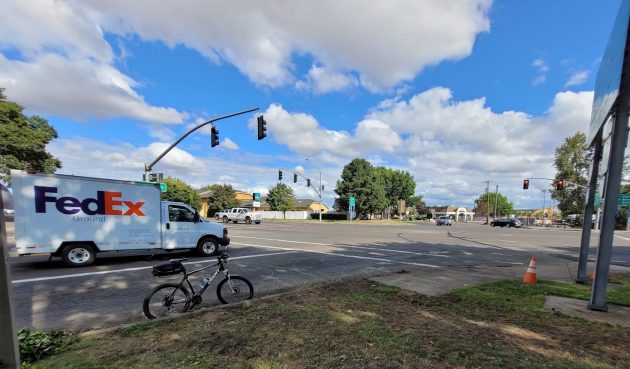 This intersection — Pacific, Airport Road and Albany Avenue — is a challenge for people on bikes and on foot.

A local government agency is giving people a chance to say which projects they would support in order to make it easier or safer to get around in the Albany area by bicycle or on foot.

This comes in the form of an online survey sponsored by the Albany Area Metropolitan Planning Organization, which serves to coordinate transportation projects. Its territory includes Jefferson, Millersburg and Tangent along with Albany.

The MPO is working to put together a bicycle and pedestrian plan for the greater Albany area.

Last spring it sponsored a survey, also online, that asked people who drive everywhere why they don’t take a bike more often.

Fifty-four percent of the 246 people who answered that question cited a lack of bike lanes or off-road paths and the like. Forty-nine percent had safety concerns about roads and intersections.

Respondents also got a chance to list improvements they would like to to see. Now many of these suggestions have been compiled, and the new survey asks people which they would support.

The ideas range from intercity paths between the communities in the MPO to local additions to the walking and cycling facilities in different parts of Albany.

The survey can be accessed here. The MPO says the results will be considered as one of several factors that go into the final plan.

But don’t wait too long if you want to take part, says Catherine Rohan, assistant transportation planner for the MPO, because the survey will close Sept. 29.

Among the ideas listed are a multi-use path between Jefferson and Millersburg, separated bike lanes on Old Salem Road and Salem Avenue, five-foot shoulders on Century Drive, separated or buffered bike lanes on parts of Geary Street and Queen and 34th Avenues, similar improvements along Waverly Drive, and in South Albany and Tangent, a multiuse path on McFarland Road and Looney Lane.

In Albany, the streets mentioned already have bike lanes for the most part, but evidently they don’t feel safe enough to everyone. (hh)


8 responses to “Ideas to make biking safer: Take the survey”