I-5 expansion: A ‘change in direction’ 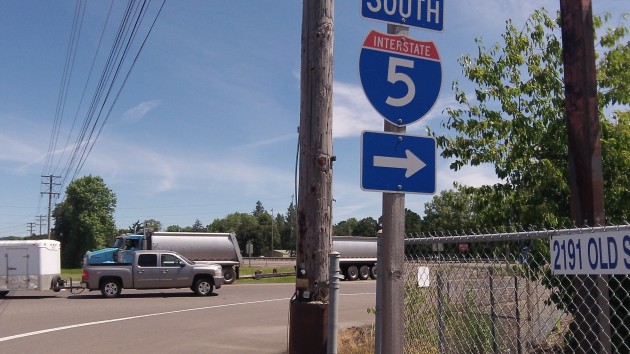 The southbound Murder Creek interchange would be one of three to be closed.

For the last 10 years or so, ODOT engineers and others have been planning how to make Interstate 5 function better in the Albany area, and last year they published a comprehensive plan covering the six miles from Santiam Highway to the South Jefferson interchange. Now they realize they’ll never get the money to do all this at once — one early estimate of the expense was $500 million — so they’ve given up on writing an environmental assessment for the entire project. Instead they hope that individual elements of the overall plan will get done if and when funding ever becomes available.

I’ve been trying to keep track of this long planning process, and I noticed that ODOT’s project website promised an environmental assessment for late in 2014, to be followed by a public hearing early in 2015. With the year half gone, I wondered what was up. And as usual, Rick Little, ODOT’s spokesman for this region, came up with the answer.

No, he reported, the environmental assessment was not completed and no hearing is scheduled. “Based on guidance from the Federal Highway Administration, we will not complete the EA.”

The plans worked up by ODOT staff and local advisory panels called for a third travel lane on I-5, major changes at the Knox Butte and Santiam Highway interchanges, construction of a new Millersburg interchange, closing the Viewcrest and two Murder Creek interchanges, and changes in surface streets near the freeway to make it all work.

“A single project of that scope would cost in the hundreds of millions of dollars and there is no funding of that amount identified in the next twenty years,” Little wrote in an email. Individual parts of the overall plan apparently could be built without environmental assessments because their impacts would not be significant. “Therefore, it was decided that there would be no benefit of gong to the time and expense necessary to complete the EA. Instead, we will work to find funding for the smaller projects in the years ahead and target the project’s remaining $2 million toward one of those.”

How much has been spent on this assessment so far? I forgot to ask, but a fact sheet published in 2010 said the environmental study required by the National Environmental Policy Act was estimated to cost $5 million.

Little said ODOT will publish a final document on this planning venture when it’s done. “We were hoping to explain the change in direction to the public when we released that document,  but as you often do, you beat us to the punch.” (hh)