Hydro may resume any time 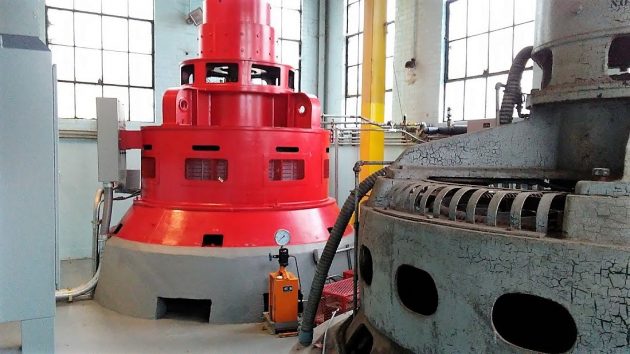 The big red generator at the Albany hydro plant may soon be humming again. (In the foreground: Its antique neighbor at the Vine Street plant.)

The generator in Albany’s Vine Street powerhouse has been quiet this fall, a period when normally it would have been running. But it may start up again in a matter of days and once again earning money from electricity sales.

The city water department has kept the hydro operation shut down because the flow in the Albany-Santiam Canal had to be kept low in order for the city of Lebanon to do construction work in or near the canal. Lebanon is building a new system to take water directly from the South Santiam River instead of the canal.

Lebanon’s work in the canal is expected to conclude this Friday (Dec. 8), City Manager Gary Marks told me by email this week. “I wish we could have finished work sooner,” he wrote, “however, the federal regulatory process added extra time to the effort.”

Albany officials say that if it hadn’t been for the Lebanon project, they could have started the generator after its usual summer shutdown on Sept. 3, when the South Santiam once again had enough flow — 1,100 cubic feet per second or more — to allow Albany Hydro to operate under its federal license. If the turbine had been spinning every day since, electric sales to Pacific Power would have generated an estimated $56,000 by now. (That’s at the rate of about $4,000 per week.)

“The City of Lebanon is grateful to our Albany neighbors for their accommodation of our project,” Marks said in his email. “Operations at the Albany hydro plant should be in a position to restart soon.”

Albany Councilman Rich Kellum had mentioned the lost electric revenue at a recent work session when the council discussed a proposed agreement under which Albany is to accept for disposal a certain amount of “biosolids” from the Lebanon sewage treatment plant in order to help Lebanon this winter. Albany already takes this kind of waste material from its own treatment plant to the Coffin Butte landfill because a system designed to reduce the volume of biosolids has not worked properly since the new Albany-Millersburg Wastewater Treatment Facility was finished in 2009. Lebanon will reimburse Albany for the cost of handling the additional stuff.

The Albany council approved the agreement with Lebanon on Wednesday night, and Kellum did not mention the power issue again. (hh)


2 responses to “Hydro may resume any time”