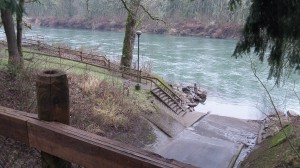 The boat ramp at Hyak Park.

If people still want to to smoke, fine. But why do some of them have to throw away their butts and leave them all over the countryside? If you’ve ever been annoyed by people who toss their spent cigarettes on the ground wherever they are, this story is for you. In Benton County, at least, they don’t always get away with it.

On Jan. 19, just before midnight, two Benton County sheriff’s deputies pulled their cruiser into Hyak Park on the Willamette River. According to their report, they parked in a space two spots down from a 1999 Dodge Dakota pickup. They noticed “six to eight cigarettes on the ground next to the driver’s side door, one of which was still smoking.”

One of the deputies asked the pickup driver if those were his cigarettes on the ground. The driver, a 40-year-old man from Albany, said they were. Why did he throw them on the ground? “I didn’t know it was illegal,” he replied. The deputies asked him to pick them up, and he did. When he was done, he was arrested, cited for “offensive littering” and let go. State law calls for a maximum fine for littering of $1,000. Let’s hope this hapless guy gets away with not having to pay quite that much.

There remains the question of why somebody was sitting in his truck at Hyak Park near midnight in January, with the window down and smoking up  a storm. Doesn’t that seem odd? Well, says Capt. Gregory Ridler of the sheriff’s office, “It is one of many odd things that go on at Hyak sometimes. We like to keep an eye on it for that reason.”

Hyak is a very nice little riverside park, and if Sheriff Diana Simpson’s deputies keep an eye on it, as they do, members of the public have reason to be glad. (hh)