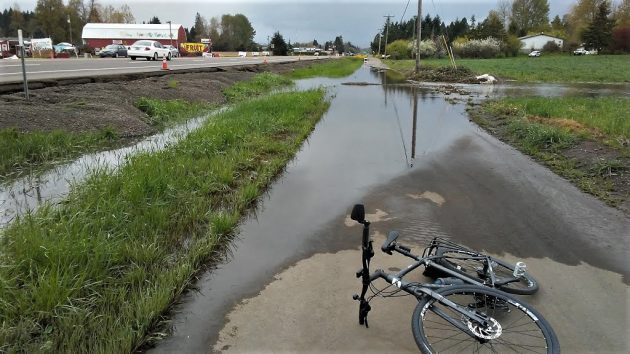 On the Highway 34 bike path on Sunday afternoon.

Expect possible delays on Highway 34 east of Corvallis starting Monday. ODOT says it will have to close the right lanes to make repairs after last week’s flood.

On Sunday I took a ride down the Highway 34 bike path to check things out. A short section of the path, less than half a mile west of Colorado Lake Drive, still had water running across it. It was passable, I’m pretty sure, but I didn’t test it because I didn’t want to get my feet wet.

The same area of the highway, between Colorado Lake Drive and Peoria Road, is where ODOT says crews will be working starting Monday, getting rid of debris, clearing culverts, and rebuilding the highway shoulders.

“Single lane closures should be expected for at least two weeks,” ODOT said in an announcement. “Heavy equipment will be regularly moving through the area. The westbound right lane will be closed first, then crews will move to the eastbound right lane. Work in that section is expected to last at least a week.”

Then, the week of April 22, crews are expected to work on the highway between Peoria Road and the bypass.

ODOT says the bike path may need repairs too, but the only thing I saw was a few minor piles of gravel built up by the flooding that closed the highway part of last week. (hh) 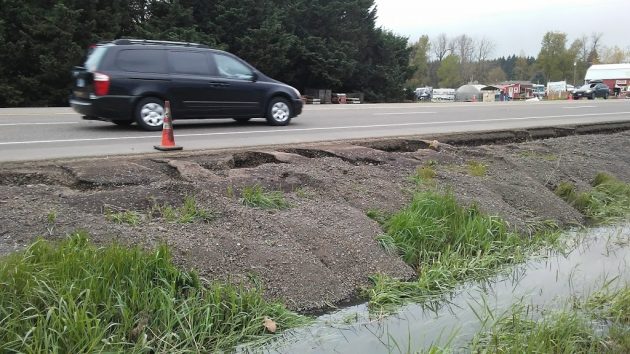 Notice how last week’s flooding undercut the pavement on the highway’s westbound shoulder.

One response to “Hwy. 34 and bike path: Checking things out”