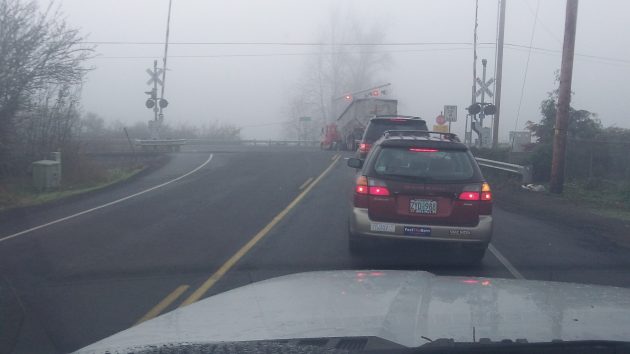 In the fog on Friday morning, a tractor-trailer waits — and waits — to turn left from Independence Highway.

ODOT has announced more than $8 million in projects to improve safety on the Albany-Corvallis Highway, mostly on the Corvallis end. But the hazards at the junction of Highway 20 with Independence Highway remain unaddressed and unresolved.

Last week ODOT announced that starting in 2017 or later it would:

♦ Spend an estimated $1.7 million to widen the shoulders of Highway 20 through the sweeping curve at Garland Nursery.

♦ Install a median acceleration lane and make related improvements for traffic turning left from Granger Avenue, at a cost of $2.3 million.

♦ Build a two-way left turn lane for the half-mile from the Children’s Farm Home access to Merloy Avenue, $4.2 million.

The two million-plus at Granger would be better spent on finally installing a regular traffic signal, replacing the blinking warning lights put in about 10 years ago the last time ODOT tried to make this highway safer. More blinking lights, along with wider pavement and a lane for left turns to go north, were installed at Independence Highway at the same time. Those additions have helped, but not enough.

ODOT is reluctant to add more traffic signals because, presumably, Highway 20 is supposed to move traffic instead of stopping it every few blocks. But that didn’t keep the state from adding signals at Conifer and Circle in Corvallis some years ago. At Independence, the situation is often as dicey as it was at those other places where signals now exist.

Independence is a busy truck route, carrying one fast-moving Republic Services truck after another, especially because of the added activity at the compost operation on Camp Adair Road. (The pavement on Camp Adair has begun cracking under all the heavy loads, in case the Benton road department hasn’t noticed.)

But making a left turn from Independence on to Highway 20 toward Albany is often impossible. And for long trailer rigs it seems especially risky since their tail ends barely clear the railroad tracks when they have to wait. Maybe this accounts for many more trucks using Spring Hill Drive through North Albany to get to the light on Highway 20 at the bridge. That has led to other issues, including the propensity of top-heavy trucks going fast to make the light and tipping over on the steeply-banked corner.

It’s time for ODOT to take this seriously. Traffic signals at Independence would solve many problems. And at Granger too. (hh)