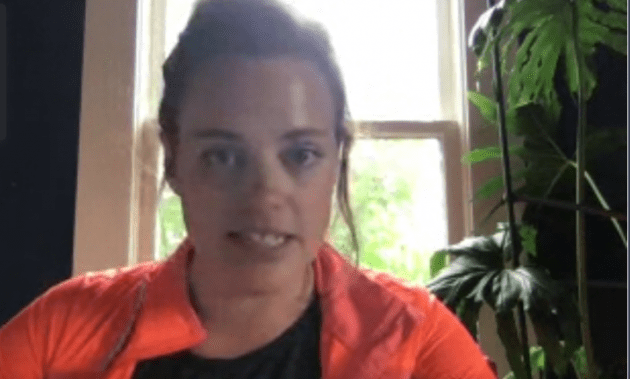 Stephanie Newton, chair of the Albany Human Relations Commission, as she appeared on  GoToMeeting during Monday’s virtual council work session.

Albany’s Human Relations Commission appears to have crashed, brought down by disagreement on the meaning of concepts such as tolerance and respect for opposing views.

The seven-member volunteer board, created by the city council, has three vacancies, and one of the remaining four, Jo Rae Perkins, is a conservative Republican now busy running for the U.S. Senate.

Two of the commission members, Jessi Brenneman and Daniel Ropp, have just resigned. In emails to the city staff, they complained of not having their views respected by others on the panel. You can read their letters online, starting on page 398 of the council’s Sept. 23 agenda here.

The Sept. 22 meeting of the commission was canceled for lack of a quorum. At Monday’s virtual city council work session, commission Chair Stephanie Newton asked the council to appoint new members because she wants the panel to be able to move forward.

Each member of the commission is appointed by one council member or the mayor. Filling the current vacancies is up to Councilors Bessie Johnson, Rich Kellum and Mike Sykes. But they don’t sound inclined to do so.

“I’m not going to put anybody on there,” Kellum said. “It’s broken. Until the end of the year, it’s dead.”

There was a good deal of discussion, with councilors except for Dick Olsen more or less agreeing with Kellum. (You can get it all when the audio recording is posted under council meeting materials on the city’s website, cityofalbany.net.)

Whether that happens may be decided after Jan. 1, when three new councilors take office. Councilors Kellum, Sykes and Bill Coburn, who appointed Perkins, are not seeking re-election this fall.

The commission was created about 13 years ago, prompted by a local flap after someone proposed that a portion of a city park be dedicated to Latinos. Then, two or three years ago, the board asked to include words the equity, inclusion and diversity in its founding ordinance, which caused council pushback but ended in a compromise.

At the root of the issue is this: Over the years the commission has taken up the same “progressive” causes that are roiling America, and conservative members of the council view some of these causes as misguided or wrong. (hh)