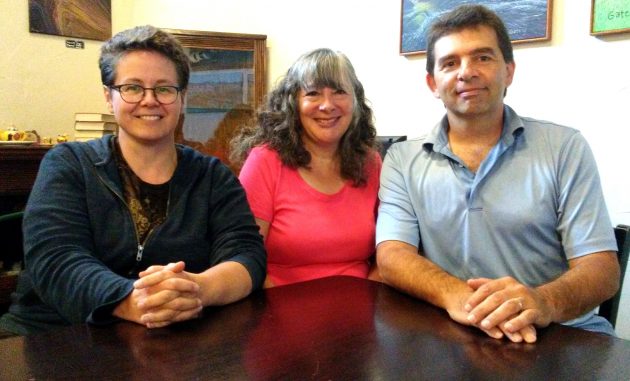 How about this: A community of small cottages, each with room for one or two people, clustered on maybe an acre or so, with rents low enough that some of Albany’s residents with very small incomes could live there without fear of being thrown out on the street?

An Albany group has a plan to make this happen, and on Wednesday, at the Little Wuesten Cafe downtown, I had a chance to talk to three of its leaders.

They are Stacey Bartholomew, a caregiver in private business who is president of the Creating Housing Coalition; coalition vice president Carol Davies, retired from business and now substituting as an educational assistant; and Dan Easdale, former manager of a homeless shelter elsewhere in Oregon and now in charge of outreach for the group.

The main point I took away from our chat is that theirs is not some half-baked dream of a bunch of starry-eyes do-gooders. No, they have a concrete, detailed plan that has worked elsewhere. They realize they can’t cure homelessness in Albany, but they intend to do something, something that will actually work for at least a few people whose main problem is that they haven’t been able to afford a place to live and face all kinds of issues as a result.

What they have in mind is not some collection of temporary shelters, not some tent city of the kind we have seen on the news elsewhere. Instead they aim to emulate Emerald Village in Eugene, whose evident success this video reports.

They’ve picked a name for the development: Hub City Village. It would have 20 to 25 small houses, of between 200 and 300 square feet each, big enough for one or two persons to live in as a permanent home.  Contractors would build the houses, but would-be residents would be expected to help in the construction. Residents would have to have some income, and the rents would range from $250 to $350 a month.

The place would be self-supporting without direct subdidies from taxpayers. Rents would have to be high enough to  cover maintenance and other items. Tenants would be charged a monthly amount that would become their savings account. To be selected, tenants would be vetted by a committee that includes a representative of the surrounding neighborhood.

The coalition — organized as a nonprofit corporation with about 15  members — is raising money.  They are looking at potential sites that are properly zoned. They hope to secure the land and complete other preliminaries, such as developing a site plan and getting it approved, in 2020. Then they expect construction of the little houses to start in 2021.

If you want more, such as updates on how the plans progress, the coalition’s website, creatinghousing.org, may help. (hh)