How’s our water supply holding up? 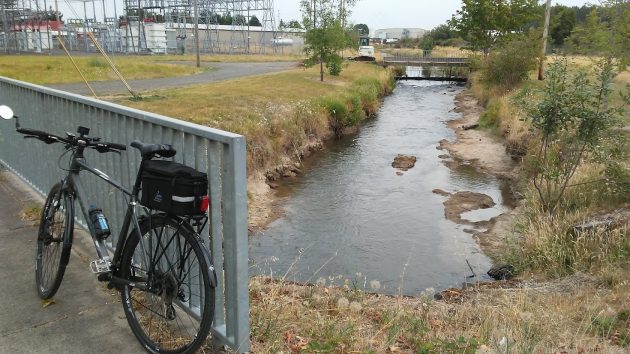 The Albany-Santiam Canal as seen from 34th Avenue on July 31.

The apparent low flow in the Albany-Santiam Canal made me wonder how our water supply was holding up this summer, which has been drier than usual and exceptionally warm. The word from the city of Albany is that we’re in pretty good shape but should conserve water when we can.

As you know, Albany and Millersburg get their water from two points on the Santiam River system. The Albany-Santiam Canal is fed from the South Santiam above Lebanon. The second intake and treatment plant are on the Santiam itself, a few hundred feet below where the South and North Santiam come together.

In both the South and North Santiam, river flow is at the normal low for this time of the summer. But, fed by releases from upstream reservoirs, the flow has been steady, about 890 cubic feet per second in the South Santiam at Waterloo and a little less in the North Santiam at Greens Bridge.

The National Weather Service makes the point on its hydrograph for the South Santiam at Waterloo that river flow is 100 percent of normal.

After I noticed what looked like the low water in the Albany canal last Saturday, with the mud banks showing near 34th Avenue, I asked Kristin Preston, operations manager in Albany Public Works, if there was any reason for concern.

“No, there is nothing new to report,” she replied. “We’ve not had any issues with water supply and have been keeping up with the high, summer demand.  Yes, water conservation when possible is appreciated!”

In other words, while we don’t have to feel guilty about taking a shower, this might not be the best time to clean the driveway with a hose. Use a broom instead. (hh)


6 responses to “How’s our water supply holding up?”