How to solve the street repair dilemma 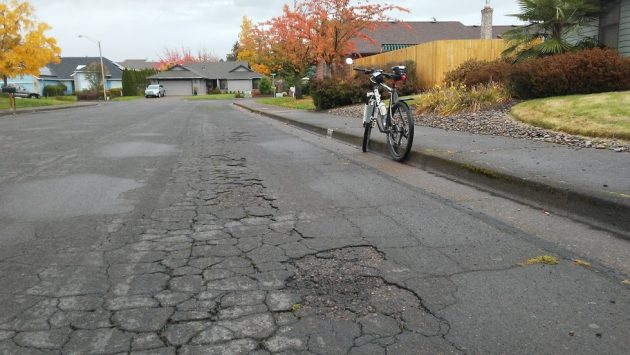 Taking a look at Fir Oaks Drive S.W., where the pavement is failing.

Fir Oaks Drive winds through a posh neighborhood in southwest Albany that is less than 45 years old, and its crumbling pavement illustrates a dilemma that property owners and city officials face: When the street was built, nobody thought of the future and set aside money to keep it in good shape.

A reader of hh-today has called attention to the disintegrating surface of Fir Oaks Drive for the last three years, each time in response to a story about Albany street funding. The most recent was his comment on the Oct. 14 report that the city council had put off consideration of a bond issue to fix segments of six arterials or collectors.

“It is worse than a cobblestone street, with large sections of blacktop missing and piece-worked pot hole repairs and large cracks for the entire block,” wrote Richard Kay, who lives on Fir Oaks. “The homes in this area have a much higher tax base and a worse road than most listed in your article.”

Last week I took a look, and the photos here are the result.

The neighborhoood is not very old, I learned from Gorden Steffensmeier in the engineering section of Albany Public Works. “Fir Oaks Drive was built with Phases 5 and 6 of Fir Oaks subdivision. Those 2 phases were built in 1975 and 1976.”

Holes in the pavement now reveal another surface below. And sure enough, city records show that Fir Oaks received a “slurry seal treatment” in 2000. Steffensmeier explains: “A slurry seal is a thin coat of water, asphalt emulsion, fine aggregate, and some additives. It is applied to a street to extend the life of the asphalt.”

The slurry seal didn’t last. In some sections it now resembles ancient cobble stones, with grass peeking up from the cracks: 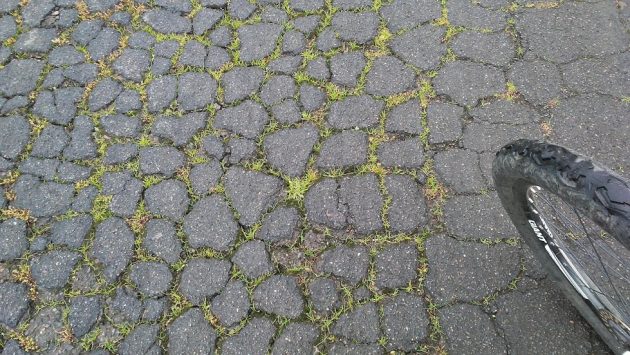 For years, city officials have made the point that the local share of the state fuels tax is not nearly enough to pay for all the street maintenance and repairs that should be done. The city’s website devotes a long and detailed explanation to the subject here.

The long and short of it is that Albany has a backlog of many millions of dollars of street work. Many cities across America are in the same shape. That’s because no one ever said, when a new street was built, how exactly are we setting aside money so that we can repair it when it wears out in 30 or 40 years. Nobody says that now, even as new streets and subdivisions are springing up all over the place.

In some planned developments, where the common property is owned by an association, the bylaws demand that the owners set aside money for reserves and that repairs be made every few years. If cities and their voters and taxpayers were smart, they would find a way to apply that principle to all new subdivisions as they are being built.

That would solve the problem, not now but for our children in the years to come. (hh)


17 responses to “How to solve the street repair dilemma”