How to solve fight over canal 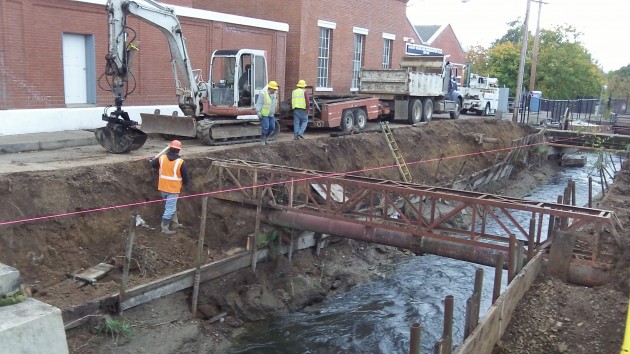 A contractor, Tornado Soft Excavation, works on a $265,942 project to repair the banks of the canal outside the Vine Street water treatment plant in Albany Tuesday.

Albany and Lebanon are in danger of slipping into an un-neighborly fight over the Santiam-Albany Canal. Albany’s latest overture is not likely to help, and already the spat is costing Lebanon more money — on studies and options on land for a new intake — than it should have to spend. For my recommendation for resolving the dispute, read this story to the end.

The 18-mile canal feeds Lebanon’s water treatment plant at about Mile 6. Twelve miles farther downstrean, at the Albany end, it meets a small part of Albany’s water needs and also spins the sometime generator at the Vine Street powerhouse. Here’s the problem: Lebanon wants to build a new water treatment plant. Albany won’t grant it a new intake location on the canal unless the cities reach an agreement on how much Lebanon should pay to help maintain the canal and to reimburse Albany for part of the costs of rebuilding the diversion dam and headgate and installing a fish screen in 2005 and ’06.

Negotiations have run aground. Lebanon has taken steps to study developing its new intake on the river instead of the canal. Presumably it would have to meet regulatory requirements on fish protection and so forth. But if this is less expensive than staying on the canal, it would be wise to go ahead.

But Albany thinks going to the river would cost Lebanon far more than coming to an agreement regarding the canal. Albany’s council has now authorized the city manager to offer that Albany help pay for Lebanon’s intake study to make sure all possible costs are considered. I would not be surprised if Lebanon said, “No thanks, we think we can figure this out on our own.”

Unfortuntely, the Democrat-Herald’s Steve Lundeberg reported on Facebook on some ill-advised banter during Monday’s city council work session. (I wasn’t there because I had another obligation for part of that time.) According to Lundeberg, somebody on the council joshed about maybe putting a gate on the canal and threatening to flood Lebanon as a way to encourage a settlement of the money dispute, and the public works director supposedly deadpanned that the city didn’t have the means to do that.

Also on Facebook, Lebanon Mayor Paul Aziz and others in his town sounded miffed about that exchange. which I’m reasonably sure was meant in jest. This suggests two things: Don’t say stupid stuff at council meetings, and don’t let Facebook nonsense get you down.

Here’s the thing: Unless it is filled in and the expensive new headworks are abandoned, the canal is not going away, so Lebanon and Albany should cooperate to make the fullest possible use of this historic asset. If the cities can’t agree on terms, they should submit the dispute to a mediator and, if necessary, to an impartial arbiter. As Albany and Millersburg have demonstrated on water and sewage treatment, it’s possible and mutually beneficial for two cities to jointly manage crucial infrastructure. As long as reason prevails, there’s no reason Lebanon and Albany can’t do the same on the canal. (hh)

2 responses to “How to solve fight over canal”