How to reduce crossing waits 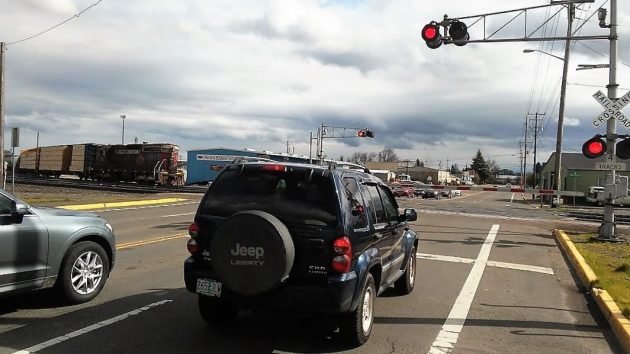 Mid-day on March 15: The switching engine was moving left and then stopped, yet the gates remained down.

One little change in operations would reduce the number of traffic delays at Albany’s Queen Avenue railroad crossing, and thus cut down on complaints about long waits as well.

At least that’s what I’m thinking after watching for a while as the bike and I were standing at the notorious crossing the other day, waiting for the gates to go back up. Notorious? Yes, frequent complaints about long delays on Queen Avenue go back at least to the 1970s and the days of the Southern Pacific.

On the day, the Portland & Western switch engine was pushing a number of cars back into the yard to the north of Queen Avenue. It had cleared the crossing and stopped well north of the street. For the couple of minutes the track was free, yet the gates remained down, and traffic remained blocked. Then the engine started south again, crossing the street and continuing some distance before stopping and reversing course, eventually clearing the crossing by 100 yards or so and allowing the gates to go back up and traffic to flow.

The change I would advocate: Fix the wiring so that when the crossing is clear and the engine is stopped or going away into the yard, the gates can go up for the couple of minutes it takes before the engine comes back. The queues in both directions on Queen would not get as long, and the waits would be less.

As long as the crossing is clear, even by just a few feet, there’s no reason to keep traffic waiting as long as the switch engine is stopped or moving away from the street. Maybe railroad regulations say something else, but that’s the way it seems to me, standing there in the wind on a cold day in March. (hh)


8 responses to “How to reduce crossing waits”