How to impede traffic flow 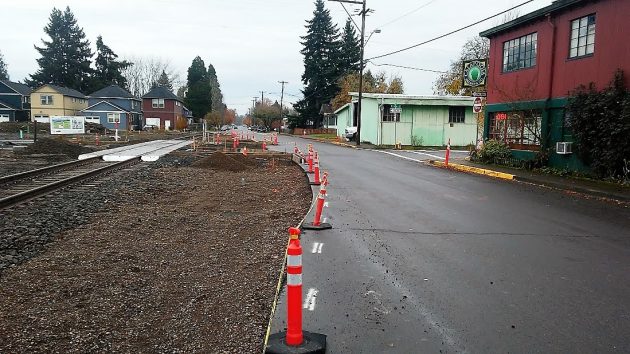 Looking east on Water Avenue at Hill: For traffic, it’s going to be a tight fit.

On Water Avenue, nearly half the street’s width has disappeared so that crossing gates can be installed at this gateway to the Edgewater Village development. Albany drivers may wonder if this is wise.

Ron Irish, the city of Albany’s transportation systems analyst, says the change leaves “room for two vehicles to pass but not much more.”

In 2008, the city of Albany commissioned a “streetscape” plan for Water Avenue. One goal was to allow development of properties north of the old Oregon Electric rail line along the street. Thus the plan tried to provide space for crossing gates that were required by the Rail Division of the Oregon Department of Transportation.

Water Avenue at Hill Street was 35 feet wide between curbs. The crossing construction has taken up about 15 feet (according to me pacing it off). This was not what planners had in mind in 2008. The plan shows the drawing of a typical intersection improvement at crossings where gates are needed. But the drawing has both travel lanes shifted away from the tracks, as was done a few years ago on Water Avenue at Jackson Street, where there was room. But the same solution is impossible at Hill, because it would demolish the Calapooia Brewing Co. and the warehouse on the east side of Hill.

Another twist: Water Avenue will get stop signs at Hill, again because ODOT-Rail says so, just like at Jackson Street, the entrance to the Wheelhouse office building. The state agency doesn’t want vehicles stopped on the tracks when a train is coming. So the heavier traffic on Water is being stopped instead.

Water Avenue used to be — and still is — a way to avoid downtown traffic and the long waits at stop lights on First and Second. But with these improvements, so-called, it’s getting less efficient and quick. (hh) 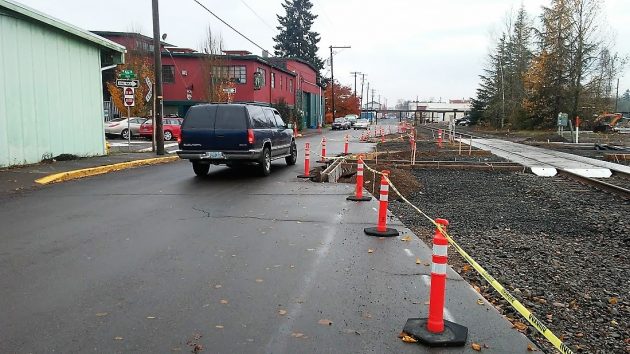 Looking the other way, west, at the Water/Hill intersection.


10 responses to “How to impede traffic flow”