How to foil would-be thieves 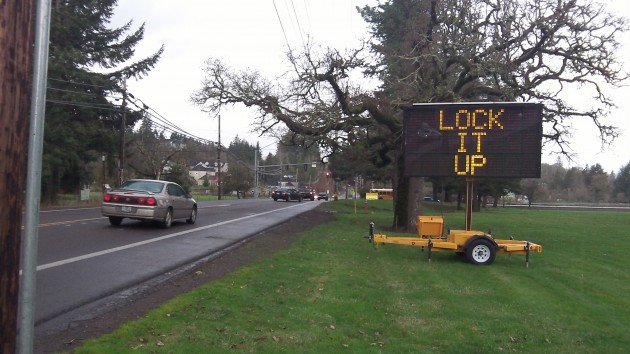 “It” refers to your car and probably your house too.

People returning to North Albany from town have been passing this reader board for the past few days. It’s part of a campaign by the Albany police to remind people not to make things easy for thieves, especially this time of year when cars may be loaded with gifts.

Lt. Casey Dorland says the police department last week received several reports of thefts from unsecured vehicles in North Albany. “The reader board is our effort to help educate people living in North Albany to secure their belongings out of sight and preferably not leave anything of value in their vehicles.”

Marilyn Smith, a spokeswoman for the city of Albany, says the reader board on North Albany Road belongs to the Oregon Department of Transportation. “They are kind enough to let us use it for this special purpose,” she told me in an email. And “yes, we’re trying everything we can think of to reduce property crimes.”

A report to the city council last February showed that while the rate of violent crimes in Albany was below average for Oregon and the other Pacific states, the city was considerably above average in property crimes. This was reflected in a city-conducted survey: 35 percent of the people taking part said they felt unsafe or very unsafe in their neighborhoods from crimes like burglary and theft.

For years the police have been telling everyone who cared to listen that one good way to protect yourself from theft is not to leave stuff in your car unattended, and to lock your car when you park it outdoors. Police Chief Mario Lattanzio repeated the message in a short video available online. (I think it was on Facebook where I saw it not long ago.)

Dorland says the department hopes to make more videos on crime prevention. “We’re learning but hope this new, to us, method of communication will be of value.”

On another front and with the same aim, Sandy Roberts, a community education specialist in the police department, has spearheaded a long-term effort to reduce crime through “environmental design.” This refers to things like proper lighting and clearing away shrubbery to discourage would-be offenders by letting them be seen and giving them fewer places to hide.

It will likely take some time before the results of these and other efforts show up in the yearly crime statistics. In the meantime, there’s this reader board to remind people to do their part. (hh) 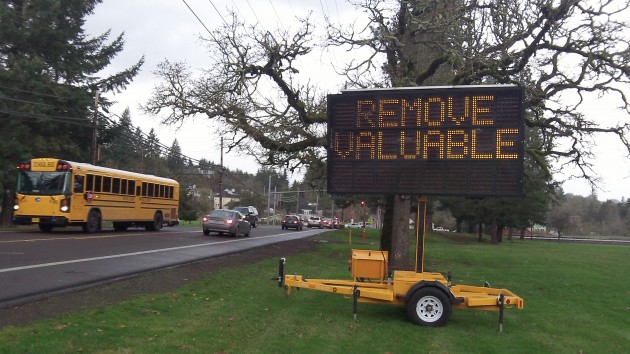 The sign’s not begin enough for the final “s.”


One response to “How to foil would-be thieves”