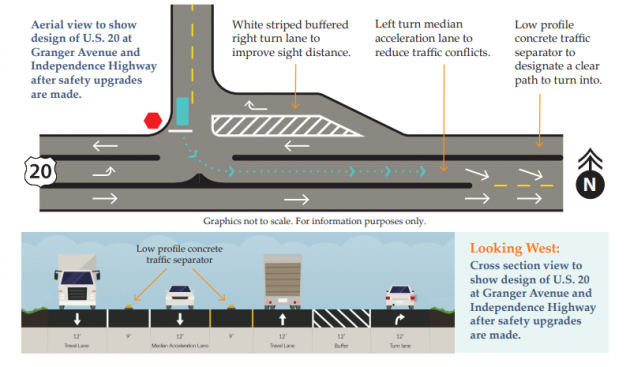 ODOT is inching ahead with plans for safety upgrades on the Albany-Corvallis Highway, and here is the agency’s concept for improving the junctions at Granger Road and Independence Highway.

The main idea is to construct median acceleration lanes on the highway for vehicles making a left turn — toward Albany — from Granger or Independence. This would allow drivers to turn when there’s a gap in just westbound traffic rather than having to wait for simultaneous gaps going both west and east.

Second, there would be “buffered” right turn lanes for Highway 20 traffic turning on Granger or Independence. This is intended to improve the sight distance for drivers waiting at the junctions to turn on the highway, either right or left.

The configuration of the acceleration lane at Independence Highway has raised concerns by the owners of Midway Farms, whose driveway south of Highway 20 is 630 feet east of the junction. On Facebook they say the project would put them out of business because customers could no longer turn left from Albany or, when leaving, toward Corvallis.

Julie GaNung, the ODOT engineer acting as the project manager, told me she’s not yet had a chance to meet with Midway Farms but expects to hear from them at a neighborhood meeting starting at 5:30 tonight at the Children’s Farm Home. She stressed that it’s still early in the design process for these projects, and ODOT’s goal is not to put anyone out of business by cutting off access.

“I look forward to taking with them,” she said. “We don’t want to shut anyone down.”

Instead of adding acceleration lanes, why doesn’t ODOT want to install traffic signals?

Because, GaNung says, signals on high-speed rural highways raise safety concerns of their own: More rear-end crashes, more red-light-running crashes, plus more queuing.  The two-lane highway is a busy commuter route and handles 18,000 vehicles per day.

ODOT has put out a two-page information sheet on the Highway 20 projects. You can look it up here.

It shows, among other things, that Phase 1, the upgrades at Granger Road and Independence Highway and near Garland Nursery, are scheduled to be designed through 2021 and constructed in 2022. (At the curve near Garland, the plan calls for wider shoulders, an added guardrail, and rumble strips.)

Phase 2 calls for widening the shoulders and adding a two-way left turn lane on the Albany end of 20, between Scenic Drive and North Albany Road, and also at the Corvallis end, between Merloy Avenue and Conifer Drive. This is to be done by 2023.

ODOT says total funding for both phases is $28.2 million.

All this planning started in 2012, when ODOT commissioned a safety audit of the highway. If the timeline holds, it will be 11 years from start to finish to get something done on this 11-mile road. (hh) 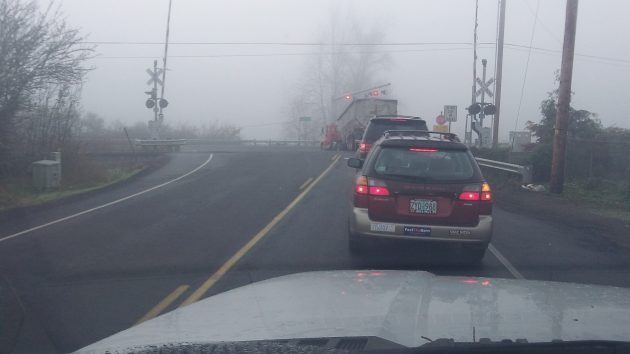 On a foggy day in November 2016, vehicles wait to turn on Highway 20 from Independence Highway.


16 responses to “How state intends to fix Hwy. 20 junctions”