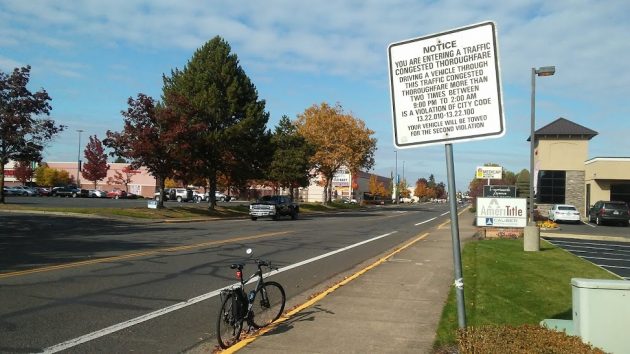 Clay Street in Albany, just north of 14th Avenue. On Sunday afternoon, congestion does not appear to be a problem.

If you’re looking for regulations made irrelevant by the passing of time, Albany’s city law on congested thoroughfares would be a pretty good fit.

I vaguely remember the agitation among city officials and others about teenage cruising. Young people would be driving up and down the “gut,” as some people invariably called it, on Friday and Saturday nights. The idea was to have something to do, to see and be seen, and to show off your ride if it was worth showing off.

In Albany, Clay Street south of Santiam Highway was a center of all that burning of fossil fuels into the early hours on summer nights. It’s hard to remember exactly why that was supposed to have been a problem. But the city council was persuaded that indeed, it was someting the city had to stop.

Which is why in 1988 the council enacted Ordinance No. 4838. The intent was to “prohibit the repeated driving of a motor vehicle along and across one portion of a congested public thoroughfare.”

The ordinance lives on in Chapter 13 of the Albany Municipal Code. And as the sign says, on Clay Street it’s against the law to drive on that section of the street more than twice between the hours of 9 p.m. and 2 a.m. If you’re caught driving there three times, you can get a ticket. And if you’re caught again, they can tow your car.

The law remains in effect and the sign is still there even though these days, if you venture on Clay Street late at night, you’re out there pretty much by yourself.

I’m no expert, but I would say that cruising has lost whatever appeal it apparently had among young people as late as 31 years ago. The problem, if there was one, has gone away. But the law against it remains on the books, as laws often do. (hh)


8 responses to “How fads change: This sign reminds us”