How about snow removal? – Hasso Hering

How about snow removal? 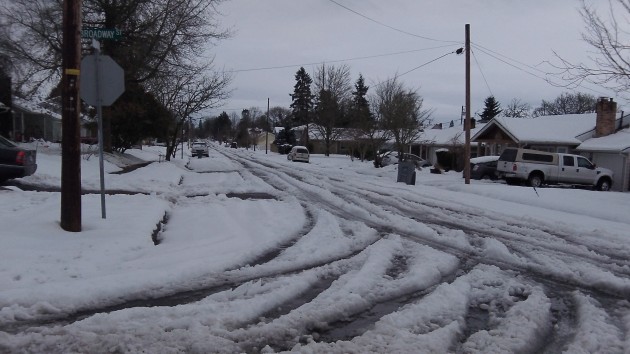 Snow is left on Albany streets until it turns to slush and melts.

Now that Oregon’s Mid-Willamette Valley is wallowing in slush, municipal authorities might give some thought to the next winter storm that brings us more than a foot of snow and then covers it with a quarter-inch of ice. We can be sure that it will happen again, maybe sooner than we think.
Prepared for snow we are not. Albany, for example, has no snow plow, which was obvious in the aftermath of the storm from Feb. 6 through 9. The city has explained that plowing would not be possible anyway because parked cars line both sides of most streets. Right, plowing is for highways and the major county roads, where the snow scooped up by the blade can be thrown into or beyond the roadside ditch. But what about snow “removal”? Would that be a possibility, at least on arterial roads?

This would be worth for mid-valley towns to look into, considering that we may be heading into one of those multi-year Pacific weather swings where colder and snowier winters again become the norm.

Meteorologist Steve Pierce, owner of Northwest Weather Consultants in Vancouver, Wash., says the recent storm fit into a pattern: Cold air from up north and moisture from the Pacific come together over Portland and the Willamette Valley about every five years or so. “The winters of 1998/99, 2003/04, 2008/09 and 2013/14 all saw significant arctic outbreaks and/or snow at low elevations,” Pierce writes.

Officials in Oregon talk a great deal about preparing for climate change. One practical thing that local government could do is to equip itself with the tools to deal with weather patterns we know about, such as relatively rare but still repeated assaults of heavy winter snow. (hh)

5 responses to “How about snow removal?”