How about meadows instead? 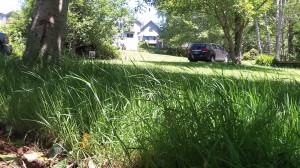 It has finally gotten warm in Oregon’s mid-Willamette Valley. And the grass is doing what grass does when it turns warm after a period of rain: It grows. So you cut it down, or if you’re lucky somebody cuts it down for you. And two or three days later, it needs cutting again. Which brings up the perennial question: Why do we insist that grass be short? Or, put another way, what’s wrong with grass that grows as tall as it wants?

If you drive through the countryside now, likely as not you drive past vast expanses of grass-seed fields. These fields look perfectly fine, the way fields should look. Not only that, but when the sun beats down on them they smell good too.

So why don’t we let our lawns — or alleged lawns in some cases — be like regular fields? Why not just let the grass grow? Well, societal pressure, for one thing. As long as you live in a neighborhood of trim lawns, letting your grass take over marks you as a slob, or at least a nonconformist, and maybe even as an extremist where nature is concerned. The prevailing opinion has it that, alas, a carefully trimmed lawn looks better than one that’s left to grow wild. But if we want to spend less time trudging around behind a mower, we first would have to agree that yards should look like meadows instead of lawns. (hh)

Michele LaBounty (via Facebook): Yes! Meadows are much more beautiful and relaxing to see than tightly manicured lawns. And they’re great habitat for birds and other creatures. Just think of how quiet it would be without mowers, edgers and, of course, blowers to sweep those nasty pieces of cut grass into the street!

Sam Suklis (via Facebook): I saw a blog recently that called Albany the “City of yellow lawns” as part of a commentary on the city’s extortionate water rates: I guess the advantage there is miles and miles of dead lawns that don’t need mowing any more. It is kind of interesting, if you drive through West Albany any time from July to fall, for example, with dead lawns in mind, what a huge majority “yellow” lawns there actually are.

Gordon L. Shadle: What’s wrong with grass that grows as tall as it wants? If your grass grows longer than a “prevailing height” (whatever that means) of 15 inches you could be charged with a misdemeanor per Albany Municipal Code 18.30.105. And subject to a $2,500 fine. My privately-owned meadow of 14.9 inches within the city limits is considered clean, sanitary and safe. But if I let it grow to 15.1 inches my beautiful meadow makes me a criminal. Such is the nature of local government.