How about fixing this bridge? 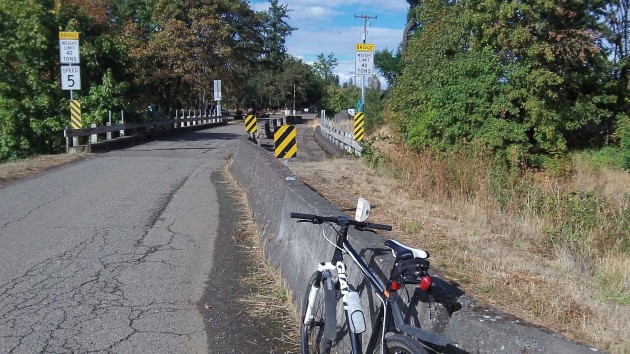 This bridge on Cox Creek has looked like this for years.

Albany and Millersburg like to show off their Talking Water Gardens. But to get there, visitors first have to pass over this sad-looking bridge. While the water gardens have won awards as an ingenious system for treating and cooling wastewater, the gateway to it seems to reflect a regrettable degree of infrastructure neglect.

The bridge takes the northern end of Waverly Drive across Cox Creek. About 10 or 15 years ago — it’s frightening how fast memory fades and I no longer have access to the original stories — the Linn County Road Department became concerned that the structure might fail under under the heavy trucks then using it. After a brief and temporary closure, the structure was reopened with one lane.

Later, the county off-loaded responsibility for the road and the bridge to the city of Millersburg. But the one-lane restriction has continued.

This little bridge, I was surprised to learn, is listed on something called the National Bridge Inventory, which says it was built in 1957. The inventory also says the bridge in 2010 carried an average daily traffic of 154 vehicles, not exactly a steady stream of traffic. Its deck and superstructure were listed as being in satisfactory condition. But as for its structural evaluation, the assessment was “basically intolerable requiring high priority of corrective action.”

Big trucks no longer go this way since the truck yard north of the creek was replaced by the engineered wetlands. So I’m thinking it should not be too costly or complicated to clean up this entrance to the Water Gardens, restore two lanes and get rid of the unsightly jersey barriers. That’s a project the joint Albany-Millersburg water management committee might want to take up and put on the list of things to get done. (hh)


5 responses to “How about fixing this bridge?”