How about dinner in the alley? 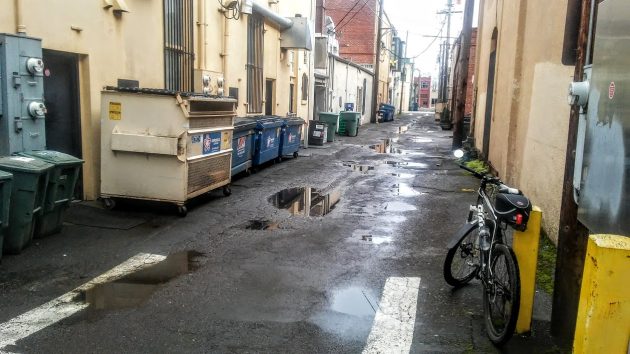 The alley between First and Second avenues, looking east from Broadalbin Street, on Jan. 28.

There’s a plan afoot to turn at least one downtown Albany alley into a place for outdoor dining. The city council heard about it Wednesday from Lise Grato, executive director of the Albany Downtown Association.

The plan involves the alley between First and Second avenues from Ellsworth to Broadalbin Street. Grato didn’t give many details, but the idea seems to be to clean up the pavement and the walls and either move or hide the trash containers.

Restaurants fronting on First Avenue would then be able to set out tables in the alley and use it as an outdoor extension of their restaurants over the spring, summer and early fall. This would be done on two and a half days per week, leaving the alley free the rest of the time for deliveries.

According to Grato, she’s been working on the idea with the Albany Visitors Association, the Republic Services disposal company, Varitone Architecture, and the building owners.

To make it possible, the organizers hope for a grant from Travel Oregon, the Oregon Tourism Commission. Grato didn’t say what the project would cost or how much of a grant the organizers seek. She did say volunteers would be needed to do some of the work to make the alley presentable.

Council members liked the idea and gave it thumbs up, though there was no vote. Later, the downtown group will ask the council for a license to occupy public space in the alley.

Grato hopes to have the project done so that that the restaurants along that block can seat customers in the alley by this summer.

Cleaning up the downtown alleys has been talked about for years. Maybe this project will be just the start. (hh) 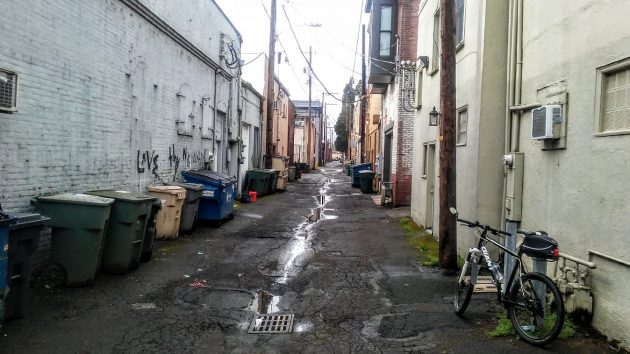 The alley from the Ellsworth Street end.

24 responses to “How about dinner in the alley?”