How about a local gas tax? 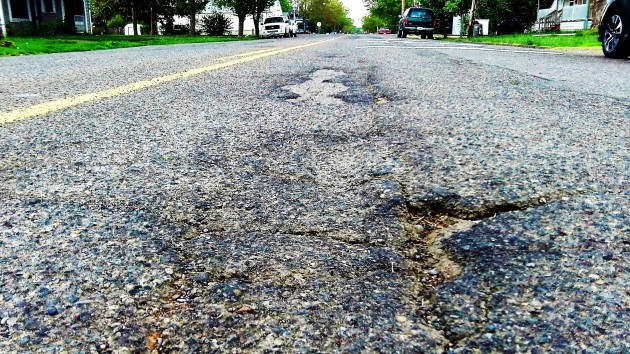 The closer you look, the more this part of East Fifth Avenue looks like a canyon.

The pavement on many of Albany’s older residential streets has been in pretty poor shape for years and isn’t getting any better. Mayor Sharon Konopa thinks that a local gas tax would enable the city to make progress on that front.

She brought up the subject Monday when the city council was reviewing changes in its “strategic plan.” The plan mentions street maintenance, and the mayor wants it to include the possibility of new revenue to pay for more of it.

“I have seen our streets in such disrepair and street funding diminish over the years with little street reconstruction and no preservation,” she wrote in an email when I invited her to elaborate. “We don’t even do slurry seals any more. I would rather avoid a street utility fee and have a gas tax instead.”

Konopa talked about a regional approach to a local gas tax with Corvallis Mayor Biff Traber last year. Traber confirmed this when I talked to him Tuesday. He said a task force of the Corvallis council has been considering a gas tax as one of the ways of meeting his city’s unmet needs in regard to streets. The idea is that Albany and Corvallis voters would be asked to approve a gas tax at the same time, but Traber says that while there’s definite interest in the idea on the task force, the timing remains uncertain.

In her email, Konopa wrote she wanted to go out for a local gas tax last November but Corvallis wasn’t ready. “I do hope we can go out to the voters this November, but not unless Corvallis is at the same time.”

The Albany council, the mayor says, is not up to speed on the topic and that’s why she wants it in the strategic plan.” “Get it in the plan and when the opportunity arises we can proceed… I would like the first five years to have a plan on what projects would take place so the voters would know where the dollars are going.”

There’s been no mention of a specific tax rate. Most of the 14 Oregon cities with a local fuel tax get 3 cents a gallon. Woodburn gets a penny and Eugene a nickel. Multnomah County charges 3 cents, and Portland voters will decide on a four-year 10-cent city gas tax in the May 17 primary. Washington County, the only other county with a gas tax, charges 1 cent. (The Albany and Corvallis mayors approached their respective counties, they told me, but neither Linn nor Benton was interested.)

Editorial comment: Considering the suspension-testing holes in some Albany streets, I agree that it would be wise to pay for getting them repaved before they all turn to gravel. And considering the wild swings in the price of fuel in recent years, I would not notice if filling my car cost me 30 or 40 cents more. (hh)