How about a civic auditorium? 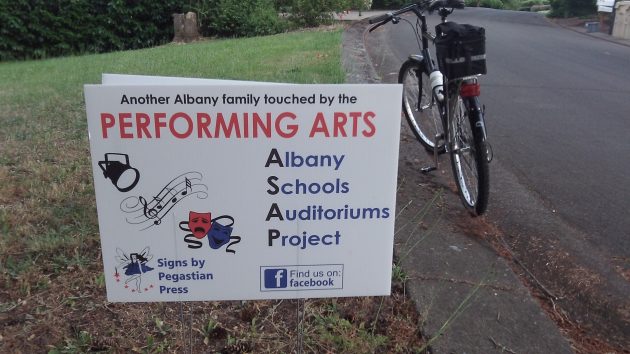 These yard signs remind me that Albany may have missed an opportunity to build a civic auditorium as part of the downtown urban renewal program. But maybe it’s not too late.

The yard signs are all over town. They are part of a campaign to persuade the school board to include proper auditoriums at both Albany high schools when it puts together its next proposed bond issue for school construction and repairs. That bond issue is likely to be put up for an election next year. It’s going to be big, possibly $100 million or so. And adding a few million dollars more for auditoriums may not add to its taxpayer and voter appeal.

Back in 2001, when the city council formed the Central Albany Revitalization Area, No.47 on the new district’s list of possible projects was to “establish and enhance public facilities such as libraries, museums, performance areas, parks and the arts.” The plan envisioned planning for this category would cost $550,000. CARA has spent $422,000 of that, all of it toward the Albany Carousel.

But overall, the district had projected spending of more than $40 million in “hard costs” during its lifetime, which is now roughly half over. Of that estimate of total expenses, more than $28 million is left for eligible projects on the list.

CARA has accomplished a lot of good things, but the job of restoring economic vitality to downtown Albany remains incomplete. Among the things the downtown area needs is an “anchor” on the east side of what’s become the main focus of downtown renewal, the west anchor being the carousel building now going up. Could a civic auditorium fill that anchor role? An auditorium seating several hundred people, and big enough to stage all kinds of performances and events? An auditorium with a parking structure next door? (As it happens, the downtown plan lists not one but two parking structures.)

I don’t know the answers to these questions. But I’ve been sitting through CARA meetings as a reporter and spectator since the beginning, and I don’t recall the board ever considering a civic auditorium big enough to attract hundreds of people downtown several times a month all year long. Instead there’s  been talk of “retail,” as though the shopping habits of Americans had not changed in 50 years.

And who knows, if Albany had a civic auditorium of suitable size, it would probably also be available for school performances and technical training in theater arts without each high school getting an auditorium of its own. (hh)


11 responses to “How about a civic auditorium?”