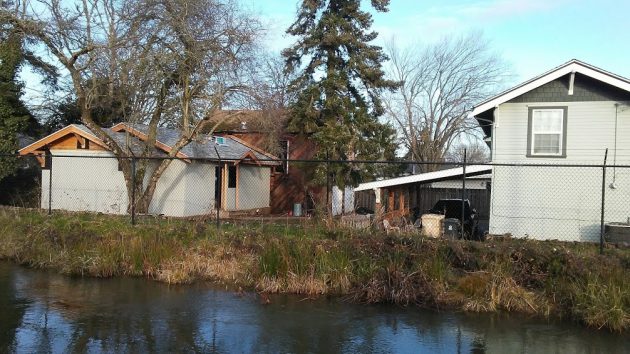 Accessory units indeed: There are three addresses on this Albany lot at 11th Avenue and the Santiam Canal.

The Oregon legislature wants more people to be clustered in existing single-family neighborhoods. But Albany Mayor Sharon Konopa says not here. So she is once again blocking a council-passed ordinance relaxing the city code on accessory dwelling units.

A four-member majority of the Albany council Wednesday approved an ordinance allowing accessory dwelling units of up to 900 square feet at single-family homes and repealing code requirements on off-street parking and owner occupancy of the main or accessory unit.  As she has done twice before on the same issue, Konopa said she would veto the change. (The second was of an ADU ordinance that because of a procedural error had not actually passed.) The council lacks the required five votes to overturn her veto.

The 2017 legislature required cities to approve ADUs on all single-family lots but allowed them to keep restrictions on parking and owner occupacy. The veto leaves Albany with a code that fails to comply with the state law because it does not allow detached ADUs everywhere the law demands. But because the legislature has spoken, the planning department has ignored this one code requirement and allowed detached ADUs in all single-family zones.

Now comes House Bill 2001 in the current legislature. It would require cities to allow up to four units on single-family lots and also forbid them to impose parking and ownership requirements. The bill had a hearing Monday, and Konopa submitted a strongly worded letter against it.

On Wednesday, she asked the council to take a stand against the bill. “We need to stand our ground,” she said, meaning to oppose the state taking away local control, as it has done on annexations and other issues. “We need to fight all we can.” But the council declined — no surprise considering that four members support the ADU provisions in the bill.

The council lines up this way: Konopa and Councilors Dick Olsen and Bill Coburn want to protect existing single-family neighborhoods from higher occupancy for which their streets and utility systems were not built, and which residents may not want. Councilors Rich Kellum, Alex Johnson II, Mike Sykes, and Bessie Johnson want to allow ADUs with no ownership or parking requirements. They argue that ADUs are expensive to build and must meet enough other rules, such as setback and height restrictions, so that they will remain rare.

The push in the legislature for higher city density is driven by the majority Democrats, who say making more housing available will help slow skyrocketing housing costs and the problems stemming from that. This led Councilman Olsen, a Democrat who once ran for the House in District 15, to express his dismay Wednesday. He blamed Democrats out of Portland for a policy that he thinks is wrong. (hh)