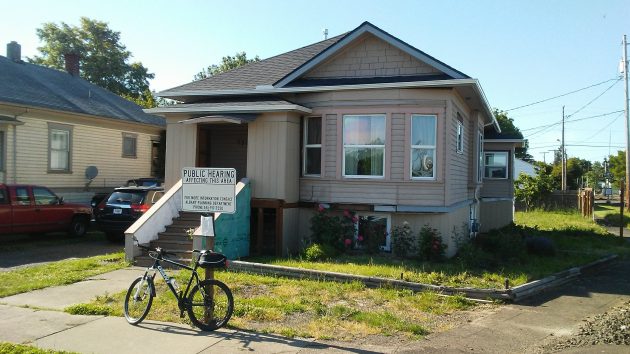 The house at 739 Sixth Ave. S.E., the subject of a lengthy hearing before the Landmarks Commission Wednesday night.

If you want to punish someone in Albany, you can sentence them to watch a hearing before the city’s Landmarks Commission. That’s my impression as I am following the proceedings before this board on Wednesday night, now going into its fourth hour just after 9 p.m.

The seven-member board, meeting remotely on GoToMeeting and by phone, was wrestling with an application to use substitute materials on a 120-year-old house near the railroad tracks, at 739 Sixth Ave. S.E.

A Corvallis real estate company bought the place, intending to flip it, but then decided to keep it as a rental, according to the testimony. They started making repairs but, about half way through the work, were served with an order to stop. The applicant said they had not realized the place was on the outskirts of the Hackleman Historic District and they needed a historic review permit to proceed.

In debating the application, the commission was hoping to restore some historic looks to the place, which had apparently undergone several alterations over the years without city reviews or permits of any kind.

For hours, then, the board members considered whether this or that item could be restored, or whether a modern material should be allowed even though the originals were removed long ago and replaced without permission.

The applicant had proposed to use a certain kind of siding on the partially enclosed porch, but the commission wanted it restored as an open porch in keeping with the Queen Anne style. That apparently will require an additional permit for exterior alterations, and a new plan to be submitted to the city for historic review.

In the end, it appeared the board approved the application, but with so many conditions that this observer couldn’t tell whether the action actually allowed the repair job to resume. There were conditions about the porch, the type of windows, window trim, and the kind of siding to be used on the bottom of the exterior walls.

Commission members complained that there’s no systematic way of notifying buyers that what they’re buying is in a historic district. These applicants said they didn’t know and never thought about it based on the looks of this place and its neighborhood, right next to the tracks.

The hearing concluded just before 9:30. And then the board spent more time talking about ways of notifying buyers of the requirements in historic districts, maybe involving real estate agents and the titling process.