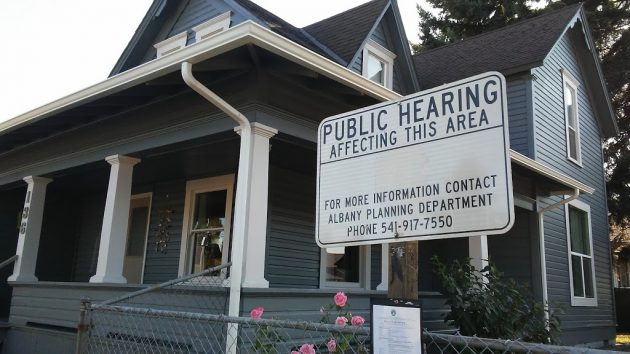 An Albany couple working to fix up their house in an old part of town have been stopped, at least temporarily, because of city regulations that discourage vinyl windows and favor siding made of wood.

Steve and Mary Alley bought the house at 136 Main St. N.E. in the 1980s. For years they rented it out. Now they have been fixing up the place inside and out. A retired contractor, Steve started to take down the deteriorted siding on the south side, intending to replace it with an engineered wood product called TruWood.

Somebody from the city saw this work going on and and told him to stop. The city also noticed that some of the original wood-framed windows had been replaced with vinyl windows. That, too, is verboten without the city’s OK.

The trouble is that 136 N.E Main, while outside Albany’s historic districts, is listed on the city’s inventory of historic properties. As such, Albany’s development code requires that any outside changes be reviewed and the use of substitute materials be approved. Applicants must show that the existing material is so deteriorated that it can’t be repaired, and material matching the original is cost-prohibitive.

For the Alleys’ house on Main, the Albany Landmarks Advisory Commission has scheduled a public hearing for 6 p.m. Wednesday, Sept. 4, in the council chambers at City Hall. The commission is supposed to conduct two “historic reviews of substitute material,” one for the windows and the other for the siding on the south wall.

The house, across Water Avenue from the new Edgewater Village housing development, is on one of my regular bike routes through town. On a ride Thursday, I stopped and chatted with Mary Alley. She told me the vinyl windows had been put in before she and her husband bought the place. If the city insists on wood windows instead, she supposed they would try to replace them, maybe at the rate of one per year.

The city’s inventory of historic properties says this is the “Baltimore House,” built around 1875 in the rural Gothic revival style. But Mrs. Alley says only a small part of the structure is original. There have been at least two additions, enlarging the place to its current 1,842 square feet.

The house features a coat of handsome new paint. “Painting  is exempted from historic review,” city planner Laura LaRoque reminded me, “so this portion of the project was able to move forward prior to the decision on the requested use of substitute materials.”

What happens next depends on what Landmarks decides. (hh) 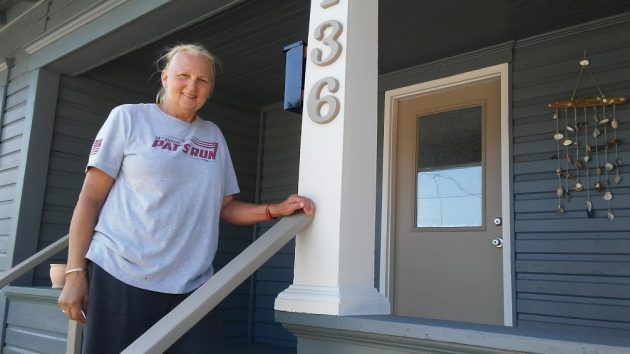 Mary Alley on the steps of the “Baltimore House” on Thursday afternoon. 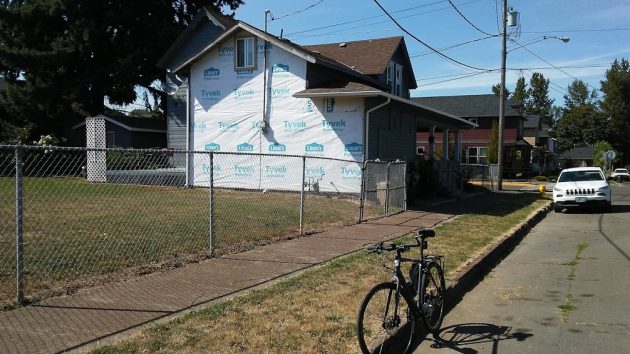 The house as seen from the south. The siding awaits the Landmarks decision.


9 responses to “House repair caught up in historic review”