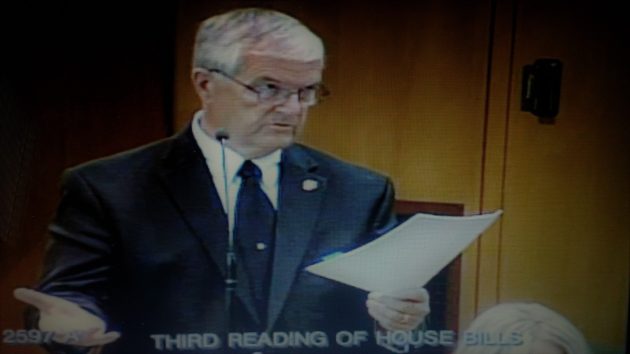 Rep. Andy Olson, R-Albany, carries his anti-distracted-driving bill on the House floor on May 1.

Despite misgivings about over-regulating the way we live, the Oregon House has approved Rep. Andy Olson’s bill to get tough on people using cell phones while driving.

The vote, on Monday, was 46-13 to pass House Bill 2597-A, which now goes to the Senate. Olson had been working on the legislation as part of a task force against distracted driving. He carried the bill on the floor, urging his colleagues to pass it as an additional tool for law enforcement.

The bill would ban any use of hand-held electronic devices while driving, whether it’s for phoning, accessing the Internet, or anything else. The bill is a response to an appeals court ruling that held current law bans only the use of phoning or texting while driving. The ruling left police no authority to cite anyone for, as an example, uploading photos while driving.

Olson said there was still concern about how the bill might affect two-way radio communications by ham radio operators, and he hoped to get that point taken care of in the Senate.

The “no” votes included that of Rep. Sherrie Sprenger, R-Scio, who said the problem is all distracted driving, not only that caused by doing things with cell phones. She recalled that years ago, as a deputy, she responded to a fatal crash in Eastern Oregon caused when a teenager driving a Toyota Land Cruiser bent down to the passenger-side floor board to pick up a cassette tape. Sprenger wondered whether we can make enough laws to stop all bad things from happening, “to stop people from doing things that aren’t smart.”

Other opponents also worried about the bill’s effect in raising the maximum fine to $1,000 for a first offense. This could cause all kinds of problems for people, they said. But the bill also calls for ODOT to create an education program that first-time offenders could take to avoid the fine.

Rep. Dan Rayfield, D-Corvallis, had a different take. As a trial lawyer, part of his work derives from the ramifications of traffic crashes. So, he argued in urging a yes vote, the bill could be seen as an “anti-trial-lawyer bill.”

Having missed the debate when it took place (it had been held over and delayed several times the week before), I watched an archived version on the legislature’s web site. It was a thoughtful and lengthy exchange, and though they voted “nay,” several speakers expressed their respect for Olson and the work he had done on the bill. (hh)