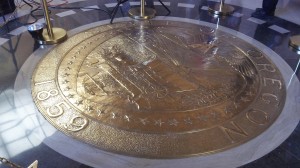 The Oregon seal under the Capitol rotunda.

The Oregon legislature will convene on Feb. 3 and stay in Salem for a month whether anybody wants it to or not. So what can we expect? If you believe the “agendas” posted by the Democrats who rule the House and Senate, nothing but good things.
In the House, for example, the members in the majority promise they’ll use the short session to deliver “better results for our students, put Oregonians back to work and make government more efficient, effective and transparent.” Can’t beat that!

They will, they say, focus on “three key areas: prioritizing access to high quality education, creating jobs and … making government work better for Oregonians.” If you think this means the Democrats will vote to abort the Cover Oregon website, don’t count on it. Will they legislate an accounting of how much public money has been wasted on Oregon’s approach to Obamacare? Dream on.

And as for promoting access to “high-quality education,” you can bet they won’t actually do so by making it easier to launch charter schools and expand school choice. What they mean instead is to pour more money into the system we have.

Democrats are in charge of the Senate as well. There, the majority also says it will focus on “key areas.” They include “accelerating job growth” and “protecting investment in our schools.” How this investment can be protected they don’t say, but presumably they mean they won’t push for anything that’s different from what we have.

All this bloviating about agendas and focusing on key areas is empty rhetoric, of course. The majorities in the House and Senate have no idea how to help the Oregon economy generate jobs. If they did and actually wanted more people to be able to find work, they would have done so by now. (hh)