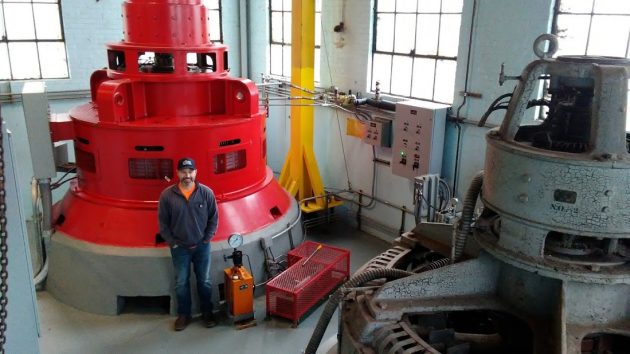 Brian Kuehn, lead water and canal operator, stands by Albany’s 500-kilowatt generator in the Vine Street powerhouse on Tuesday. The antique on the right is the No. 2 generator, inoperable for decades, made by Westinghouse in the 1920s.

Albany officials think there’s a way to keep operating the city’s electric generator while cutting back on regulatory expenses. Let’s hope they are right and Albany’s historic role in hydropower production can be continued and preserved.

Albany has generated electricity since 1888, starting with steam power. From 1924 to ’27, Mountain States Power built the existing powerhouse at the end of the Albany-Santiam Canal and installed two 500-kw generators.

The city acquired the water system and hydropower plant from Pacific Power & Light in 1984, when only one of the two generators was still working. It shut down the working machine in 1992, but then applied for and received a federal minor-project hydropower license and put in a new 500-kw generator in 2008. The machine was purchased in China because, as I was told at the time, generators of that type were no longer made in America.

The output, enough to power about 240 houses, is sold to Pacific Power under a 2008 contract. The revenue varies but averages about $80,000 a year.

In recent years, federal regulators have increased requirements on hydropower waterworks to the point where the expense in time and money outweigh the income from the small Albany plant. In March the city council authorized up to $90,000 for a study on how best to continue operating the plant or shutting it down.

The council got an update last week. Utilities Services Manager Mark Yeager said the staff consulted with a specialist in hydropower licensing law and met with Federal Energy Regulatory Commission officials from FERC headquarters. The upshot: The city could apply to give up its hydropower license and at the same time obtain a so-called “conduit exemption” that would cover the power plant alone. This would get the city out from under expensive requirements relating to the headworks on the South Santiam River and the 18-mile canal itself.

But more work has to be done. Among other things the city has to get the consent of state and federal fisheries agencies and the State Historic Preservation Office. (The hydropower plant is an historic asset, which is one reason the city was required to preserve, as an inoperable museum piece in the plant, the original instrumentation.)

Working all this out may take another three months. Then the council will have to decide which way to go. There is something both quaint and impressive about generating electricity, even a small amount, from the flow in the Santiam Canal. So I’m hoping the council will see fit to decide to keep this part of Albany history alive.

At the moment the generator remains shut down even though, based on the flow in the South Santiam, it could have run since early September. Albany is keeping the canal flow too low to power the Vine Street turbine (and forgoing more than $4,000 a week in revenue, according to my rough calculation) in order to allow Lebanon to work on a new water intake. No word on when operations will resume. (hh) 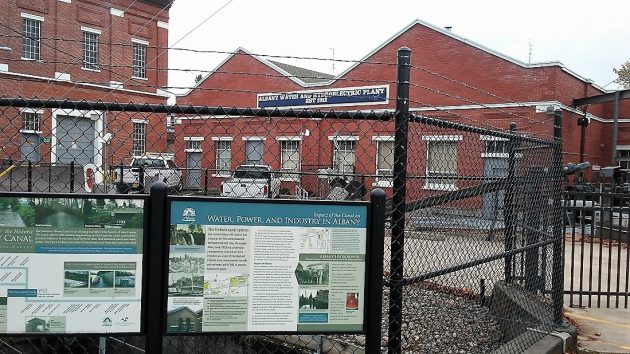 Outside the Albany hydropower plant, you can read about its history.