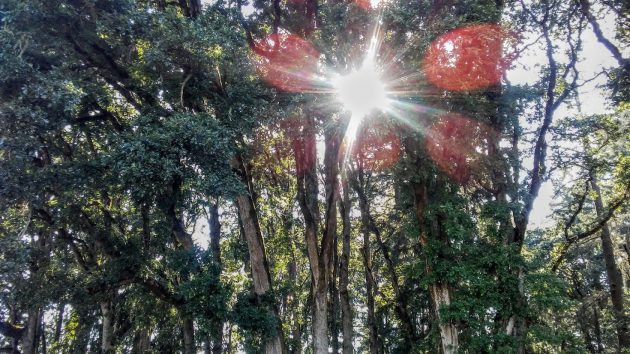 Sunshine bursts through the foliage of Hazelwood Park on July 3. On Wednesday the council will consider selling the park.

The group planning to build a village of tiny houses for the homeless has withdrawn its offer to buy Albany’s Hazelwood Park for its project even though the offer is still listed on the city council’s agenda for Wednesday night.

Carol Davies, vice president of Creating Housing Coalition, told me about the change in a comment on this story, which was posted this afternoon and originally reported that the coalition had offered to buy the park for $350,000.

Stacey Bartholomew, president of the coalition, confirmed that the offer had been withdrawn. This was done last week, she told me on the phone just now. The question is why the council agenda, which came out Friday, didn’t reflect the change. Nor was the change mentioned in a supplemental agenda that came out later.

According to Bartholomew, the group realized the cost of developing Hazelwood Park for a village of up to 25 tiny houses and related facilities would have been too great. Building on another site will leave more money for other aspects of the development.

Also, she said, bowing out will give neighbors trying to buy the park a better chance.

Creating Housing Coalition has made an offer for another piece of property in Albany, but she wasn’t at liberty to identify it.

With the coalition out of the picture for Hazelwood Park, that leaves one other offer, presuming it’s still on the table, listed on the council agenda. Three households behind the park on 17th Avenue have gone together and offered $120,000 for the property. They don’t want to lose what has been an extension of their yards.

The city council declared the 2.58-acre parcel surplus after the parks department said it doesn’t want it. The park, at 1999 Queen Ave. S.W., is sandwiched by two electric substations and backs up to houses that front on 17th.

Proceeds of the sale will go to the parks department. (hh) 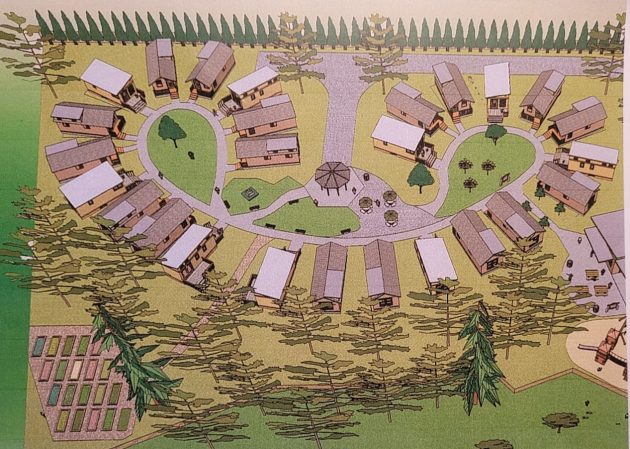 A rendering of Hub City Village from the group’s brochure, now no longer applicable because it’s based on the Hazelwood Park property.