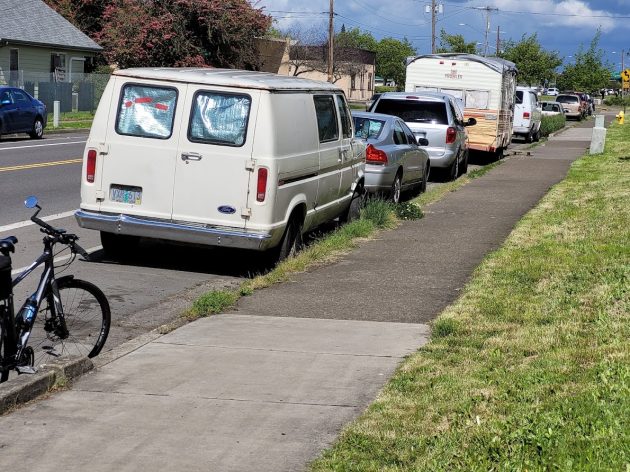 Vehicles would need a permit to park on this section of Ninth Avenue under a proposal before the city council.

Homeless people parking their vehicles outside the Helping Hands shelter on Ninth Avenue, or camping there, would no longer be allowed to do so under a proposal the Albany City Council will consider on Monday.

Kristopher Schendel, a code compliance officer with the police department, is asking the council to add two sections of streets to a zone of central Albany where the council in 2020 banned parking without a permit.

The streets affected by the change are Ninth Avenue in front of the homeless shelter, from Jackson Street to Pacific Boulevard, and Jackson Street from the Pacific overpass south to a railroad crossing.

Camping outside the homeless shelter has increased in recent years. Maybe the campers can’t find a place at the shelter, or they dont want to, or they are not allowed in overnight.

Similar camping problems outside what was then the nearby Signs of Victory homeless shelter at 11th and Jackson prompted the council to set up the no-parking-without-a-permit Central Albany Parking Area two years ago.

Now, Schendel says in a memo to the council, “property owners in the area wish to see the zone expanded due to increased drug use, trespassing, littering, and other crimes.”

In the zone, employers can get free parking permits for employees and visitors, according to the ordinance. Outsiders can’t get permits and, if caught parking, get a ticket.

The material going to the council says nothing about where people sleeping in their cars on Ninth and Jackson would likely park instead. The council has seen no reports (as far as I know) about any displacement effects of the parking ban in 2020.

The council may also wonder about just why homeless people aren’t spending nights in the respective shelters, and what might be done about that.

For example, might the city use the recent $1 million gift from the state to get those people and their vehicles off the streets altogether? So far none of that money, approved by the legislature last year, has been allocated.

Monday’s meeting is a council work session that starts at 4 at City Hall. It will be screened on YouTube and Facebook too. (hh)