Written May 27th, 2022 by Hasso Hering
Comments: one response. 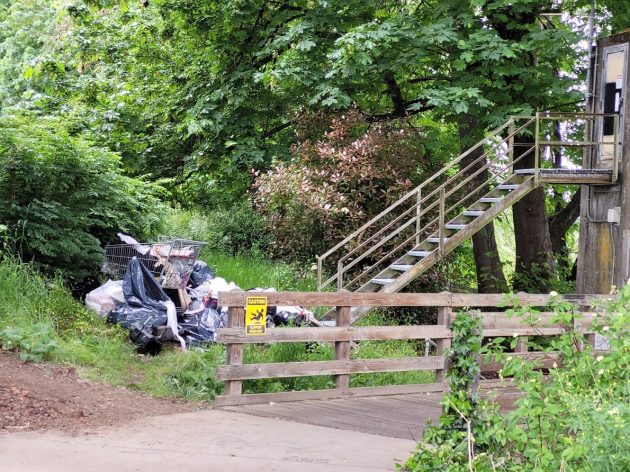 The belongings from an illegal camp had been bagged Friday for pickup by the parks crew later.

The homeless camp on the Dave Clark Riverfront Path featured in Friday’s story had been cleared by Friday afternoon.

Impromptu camping along the Willamettte River is common, but the campsite under the Lyon Street Bridge was unusual. It was the first I had seen so close to the riverfront walking and bicycling path itself.

When the bike took me there Friday afternoon, a no-camping notice had been pasted on the bridge pier, and only lengths of cardboard to sleep on were left on the ground.

Rick Barnett, Albany parks and facilities maintenance manager, sent word Friday that a path walker had notified the parks department of the camp site earlier in the week, the police had posted it since, and the parks crew had given the camper some trash bags.

“He was in the process of moving when I went by this morning,” Barnett said. “He is going to leave trash in bags and our folks will pick it up over the weekend.”

The problem, as usual, was where would he go. “He isn’t seeking services so will likely end up with his stuff in a different and less visible location,” Barnett said in an email.

A commenter on Friday’s report said camps have once again appeared on the northern extension of the Periwinkle Bikepath near Lowe’s. He’s right.

Here’s one, as it looked Friday afternoon: 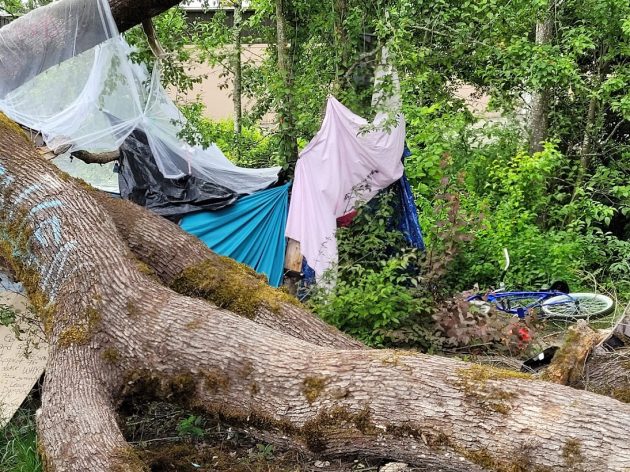 And here’s another, also Friday afternoon: 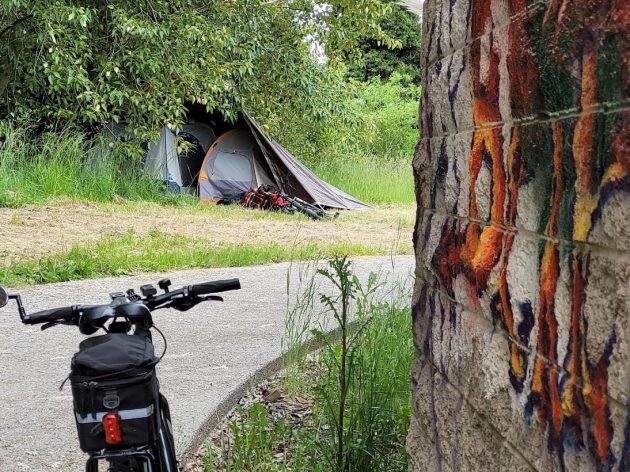 The wall on the right has become a canvas for graffiti, lots of them, and some of them colorful and big.

On the other side of the wall is Lowe’s home improvement center. The company was required to provide the path extension as part of its site approval.

That segment of the path along heavily wooded Periwinkle Creek is out of the way and can’t be seen from any street, fairly inviting unpermitted settlement by people with nowhere else to go.

When Lowe’s was built in 2015, the West Coast explosion of living rough by homeless people was not foreseen. If it had been, the city might not have required that extra length of hidden path. (hh)


One response to “Homeless camps on Albany paths: An update”