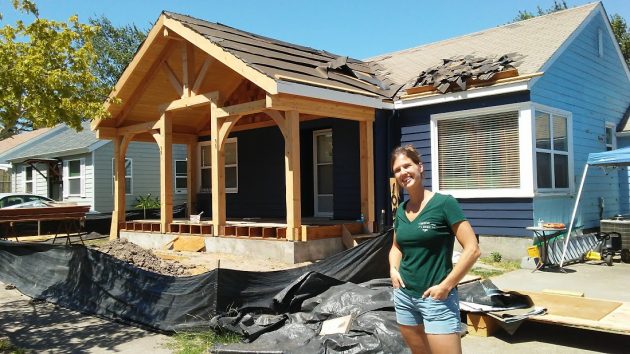 Jessica Morgan in front of her family’s house and its dramatic new porch on Monday.

Moving along Albany streets on a bike this summer, you see lots of home improvement projects going on. Few are more eye-catching than the porch going up on this block of 14th Avenue S.W.

The place is the home of Jessica and Shawn Morgan and their two sons. I was riding back from lunch Monday when the construction caught my eye.

The house, Jessica told me when I stopped to take a photo, was built in 1942. She thinks it was one of the houses built at or near Camp Adair, the World War II training base in Benton County, and moved to Albany after the war.

The Morgans have lived there since last fall. As I understood her, they had bought the place as a possible rental but then decided to move there, and they’re glad they did. They like the neighborhood, and the boys, 7 and 9, like their schools, Takena and Central.

Jessica’s brother, Ben Bliesner, is building the porch for the family. With its solid beams and dramatic shape, it seems unusual on a house of that size (two bedrooms and one bath), but Jessica says that’s the kind or porch she wanted.

I didn’t ask what this project was costing. Regardless of the price, it certainly makes the house stand out and testifies to a family’s investment in their home, their neighborhood and town. (hh)

14 responses to “Home Improvement on 14th”