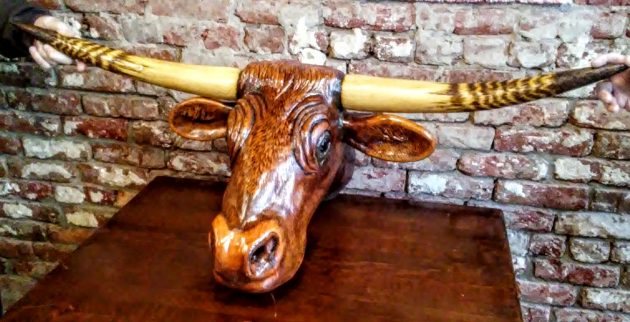 That’s a fine-looking head of cattle, and one of these days it will overlook Second Avenue in downtown Albany the way its predecessor did a century ago.

Made at the Albany Carousel, where they have long experience carving animals both realistic and fantastical, the cow’s head was delivered to Novak’s Hungarian Restaurant on Monday.

It will be on display inside the entrance for a while. But once the Covid restrictions are lifted and restaurants can once again operate normally, there will be some kind of celebration to mark the mounting of the head outside, over the door.

This will complete the historical restoration of the front of what’s known as the H. Broders Building, which was extensively rebuilt outside and remodeled inside about five years ago to house the restaurant.

When the building at 208 Second Ave. S.W. was the H. Broders Meat Market late in the 19th century, a cow’s head over the front presumably symbolized the merchandise within. In the 1940s the building housed the Snow Peak Dairy, and the head, still there, was apropos as well. 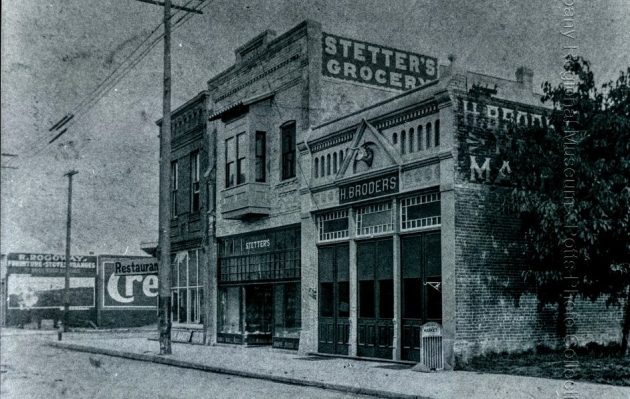 In this 19th century image from the Potts Photo Collection at the Albany Regional Museum, you can see the cow’s head on the front of the H. Broders Meat Market.

So when architect Bill Ryals led the building restoration, which was aided by grants from CARA and the state, getting a cow’s head up there was part of the plan. It took a few years to make it happen, but now the head is ready, and eventually it will be hung where the original was.

It’s made of pencil cedar, and the horns are limbs of apple wood, Ryals told me. To produce the details of the horns and head without paint or stain, the wood was flame-torched. The contrasting colors of the muzzle are in the wood itself. Several coats of spar varnish finished the job. (hh)


11 responses to “History revived: A cow’s head on Second Ave.”