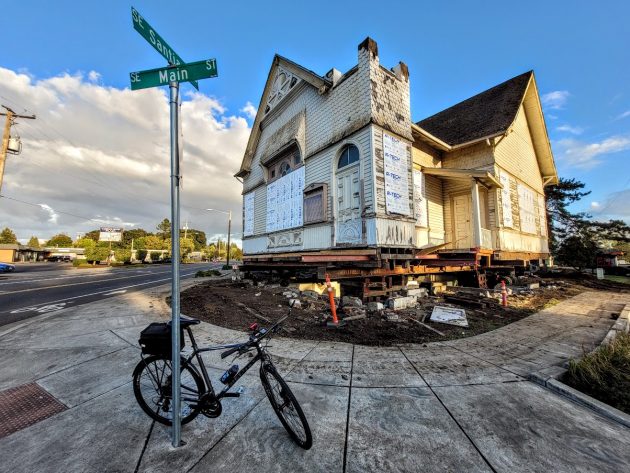 The former Cumberland church as it looked Tuesday evening, ready for its move on Thursday.

Yesterday the move of the historic former Cumberland Church in Albany appeared imminent, as the original version of this story said. But not any more.

The move had been been scheduled on three dates this month but then had to be postponed. Then it was set for Thursday, tomorrow. But as a note from Joel Orton of the Cumberland Community Events Center said this morning, it is off again. See his note in the comments below.

As you know by now, a private nonprofit has acquired the building and hired Emmert International to move it. They hope to expand and renovate the structure as a community events center.

The building sits at Santiam Road and Main Street, where it was constructed in 1892 and later expanded. It will be towed, eventually, a couple of blocks up Santiam Road and across the railroad tracks to property the events center group is buying from the city. The site, at Santiam and Pine, has been excavated and otherwise made ready to receive the building.

The move was first scheduled on Sept. 2, then rescheduled to Sept. 16, then to Sept. 28. Each time it had to be postponed because of one reason or another. Moving a building  across the mainline of the Union Pacific evidently is harder to arrange than expected.

Leaders and supporters of the project, led by President Emma Eaton of the events center board, gathered at the new site Tuesday night to celebrate the forthcoming move.

See below for an idea of how Varitone Architecture, an Albany firm, envisions the look of the structure when the events center is complete. (hh)


9 responses to “Church’s move was imminent; now it’s not”