Historic bridge piers: In the way 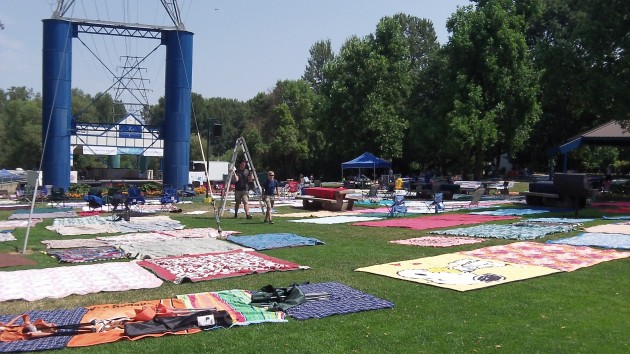 The blanket pattern shows the territory where those pillars spoil the view.

From the Department of Thinking Up Problems That No One Has Raised: When is somebody going to do something about those piers that mess up Albany’s Monteith Riverpark? Probably never, but that doesn’t mean we can’t think about it.

Those twin pillars used to hold up a bridge across the Willamette River from the north end of Calapooia Street. (A photo in one of the late Bob Potts’ “Remembering When” books shows it in 1910 and calls it the old Steel Bridge.) That crossing looked pretty spindly in the old photos and was dismantled eons ago, probably when the Ellsworth Street Bridge was built about 1925.

Now the remaining support structures, in the park as well as in the middle of the river and on the other side, hold up high-tension electric lines. Monteith Riverpark was built around those obstructions in what had been an industrial and warehouse area.

The pillars are not actually in the way except during events, when they partially block the view of the stage from a swath of lawn down the middle of the park, as illustrated by the pattern of blankets in place at mid-day Thursday in advance of River Rhythms.

I doubt whether Pacific Power has any plans to reroute its transmission lines away from the park. But maybe they could at least think about it. If those piers were taken down, concert crowds would have additional space from which the performers could not only be heard but be seen as well. (hh)


3 responses to “Historic bridge piers: In the way”