Hiking up the overpass in the smoke – Hasso Hering

Hiking up the overpass in the smoke 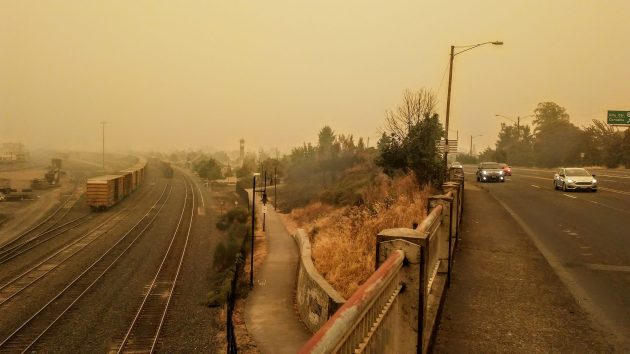 A limited view: Looking south across Albany Station from the railroad overcrossing on Thursday afternoon.

In case you didn’t notice, unlikely as that is, Albany’s air quality Thursday was considered “hazardous.” The needle on the air quality index on AirNow.gov was all the way to the right, well into the maroon category that indicates particulate readings of 300 or more.

If you smell the smoke and fine ash is settling on every surface, it’s not much comfort to know that the air is officially bad. “Oh, so that’s why I’m trying to breathe as little as possible,” you say to yourself. “Good to know.”

The forecast was encouraging, sort of. The index color on the air quality web page for Friday was no longer maroon but red, meaning that our air was going to be merely “unhealthy.”

I hope this doesn’t sound like griping. Breathing bad air is a nuisance, and it may make us sick, but in terms of suffering calamities it’s nothing compared to losing your home and all your possessions in one of these fires, or for that matter losing your life.

But this is a blog about what I see — usually from the bike, but not when we’re supposed to avoid exerting ourselves outdoors.

To get a wider view of the shroud of wildfire smoke that was smothering our town, I hiked up the Pacific Boulevard overpass. You saw the result at the top of this story.

A couple of other things I noticed on this excursion on foot. 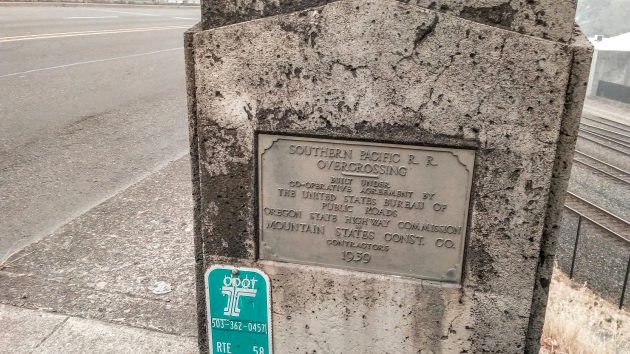 There’s a nice plaque at the end of the bridge, reminding people that the overpass was built 81 years ago, in 1939. We never see this when we cross that bridge by the thousands every day. If we did, we might marvel at the fact that despite the vast increase in traffic since then, the overpass still works well.

The other thing worth noting: The bridge was built with lights inset in the concrete posts of the railing. The lights have been broken or pushed in, and they look like they haven’t worked for a long time. 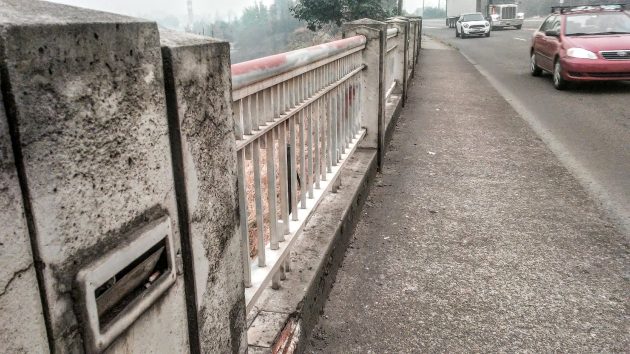 The next time ODOT has to have the overpass refurbished, in the interest of upholding the original design maybe the lights can be restored as well.  (hh)

3 responses to “Hiking up the overpass in the smoke”