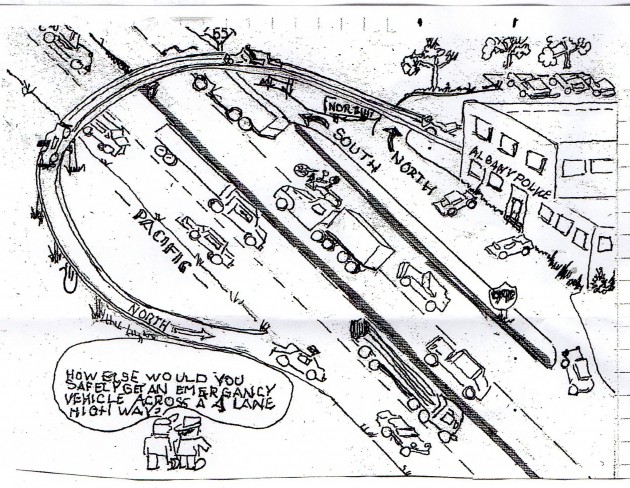 Well, if there ever are problems with access to the highway from Albany’s new police headquarters, they can always try this as Plan B. Not really, but the issue caught the satirical eye of Darrell Pepper, the retired chief of police who dabbles as a cartoonist.

The Albany Planning Commission on Monday cleared the way for the construction of both the police building at 2600 Pacific Blvd. (Highway 99E) and the new downtown fire station on Lyon Street and Sixth Avenue. Considering the years of planning and design work that have already gone into both projects, not to mention the property purchases, planning commission approval was a mere formality, but it was still necessary.

The commission quickly and unanimously approved a conditional use permit and other land-use steps for the police building. For the replacement of Fire Station 11, it approved similar actions including closing Sixth Avenue for 194 feet from Lyon Street eastward. The new station will straddle that part of Sixth.

The police headquarters will have one driveway on Pacific and a secondary one on Willetta Street near its soutwest corner. When the highway is busy, making a left directly on Pacific from the main access point will sometimes be a challenge. A “flyover” as shown in Pepper’s cartoon might be one answer. Another is to take Willetta to 29th and turn left on Pacific at the signal.

The designs of both buildings are in the final stages. Together the city expects the projects to cost around $24 million. (Albany voters approved an $18 million bond issue to cover most of it.) How close the cost estimate is everybody will find out once construction bids are opened some time next year.

As for Pepper, he was the police chief when I started working at the Albany newspaper 38 years ago. He was in the audience of the planning commission Monday, and it was a welcome surprise to see him there and to get a copy of his latest whimsical cartoon. (hh)