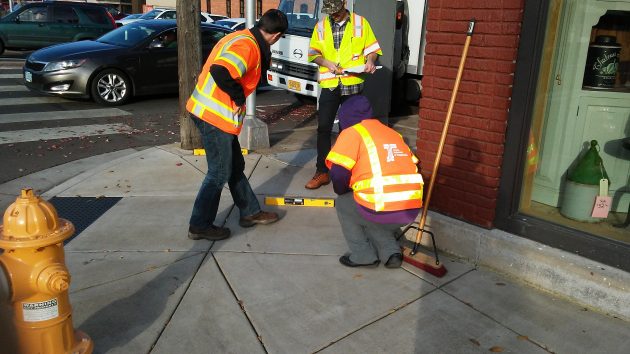 A crew at work at the corner of Lyon and First on Thursday afternoon.

If you saw crews like this and thought they were beginning to work on ODOT projects to upgrade Highway 20 through downtown Albany, sorry to disappoint you.

Over the last week or so, I noticed several small, safety-vested groups huddled on the corners of Ellsworth and Lyon, the Highway 20 couplet through downtown. On Thursday afternoon I stopped the car and asked what they were doing.

It was training, according to one guy, who told me he worked for a consultant to ODOT. He said they were measuring the curb ramps. “It was a class,” ODOT spokeswoman Angela Beers-Seydel told me by email on Friday. She hopes to find out more on Monday, and if she does I’ll let you know. (See below.)

Members of the Albany City Council — mainly Floyd Collins and Bill Coburn — have been pushing for ODOT to upgrade its share of the downtown street grid in conjunction with the $8 million-plus city streetscape improvement project scheduled to launch in 2017.

The issue came up at the Oct. 19 meeting of the Central Albany Area Revitalization Advisory Board, after city staffer Lori Schumacher reviewed the streetscape design and construction schedule. A sampling from the draft minutes:

“Floyd Collins asked if the Oregon Department of Transportation (ODOT) will be doing improvements on Ellsworth and Lyon Streets in conjunction with the project. Schumacher said that staff isn’t aware of any such plans. Collins noted that ODOT has done improvements in Sweet Home, Lebanon, Corvallis, and Philomath; yet they have not done needed improvements to the state highways running through Downtown Albany. With the City doing this work downtown, he thinks it’s shameful that ODOT wouldn’t do upgrades to Ellsworth and Lyon Streets concurrently. Coburn agreed; he encouraged staff to be more aggressive in requesting that ODOT do this work. Parks & Recreation Director Ed Hodney said that staff will follow up on the concern and try to get a response from ODOT.”

Collins, a retired public works director serving his last month on the council, thinks the state should at least renew the pavement of the heavily traveled streets.

The CARA board meets again on Wednesday afternoon (Nov. 16). Maybe the board will get an update then on what if any contribution ODOT plans to make. In the meantime, it may be comforting to know that the curb ramps have been measured, even if just for a class. (hh)

ODOT’s Angela came through with a fuller explanation on Monday, as promised: “There are new ADA ramp measurement training courses being held for ODOT inspectors. There are two phases to the course, and in one of the classes participants do go out to measure ramps using the new inspection forms and tools designed to perform the measurements. The tools consist of certain sizes and types of levels that are to be used to get the measurements.”