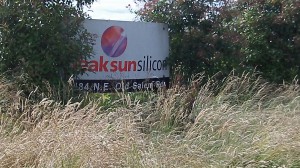 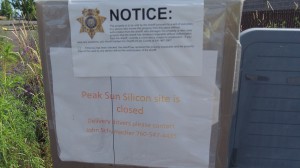 On the way through Millersburg, the continuing dismantling of the former Albany Paper Mill is not the only sad sight you see. On the opposite side of Old Salem Road, there is another, not nearly as well known or easy to see.

That is where in 2009, a company named Peak Sun opened a small factory to make a component of silicon chips for solar power generators. There was great hope that this would be one of the highlights of the evolving economy in Oregon and the world. It would be making parts for obtaining energy that was not only renewable but inexhaustible as far as mankind is concerned.

Turns out that the high hopes were too high. For one reason or another — the company cited the recession and a downturn in sales to Spain — the Millersburg plant failed to thrive. It had been started with a loan from the state Energy Department and the state foreclosed in late 2011, when the company still owed $11.2 million plus interest.

Two years later, the buildings on the west side of Old Salem Road still sit idle, a sheriff’s notice hangs near the closed gate, and the only thing that was peaking there a couple of weeks ago were wildflowers and weeds. (hh)